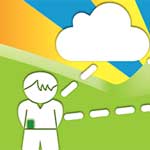 Open Garden launched at TechCrunch Disrupt NY more than two years ago. At that time, the company was focused on building a mesh network for Android phones, but since then, it has also found success through its FireChat app for offline chatting. Now, the company is expanding into the Internet of Things. Open Garden’s Mobile Network for IoT devices allows devices to talk to each other over the same mesh networking technology the company developed for its mobile apps. Besides just talking to each other, though, the system can also use a single access point to pass information to the Internet. All you need is one device in the network that is connected to the Internet. The first devices to use Open Garden’s technology are TrackR‘s key finders. You can only find your keys if they have some way to reach the Internet, after all.