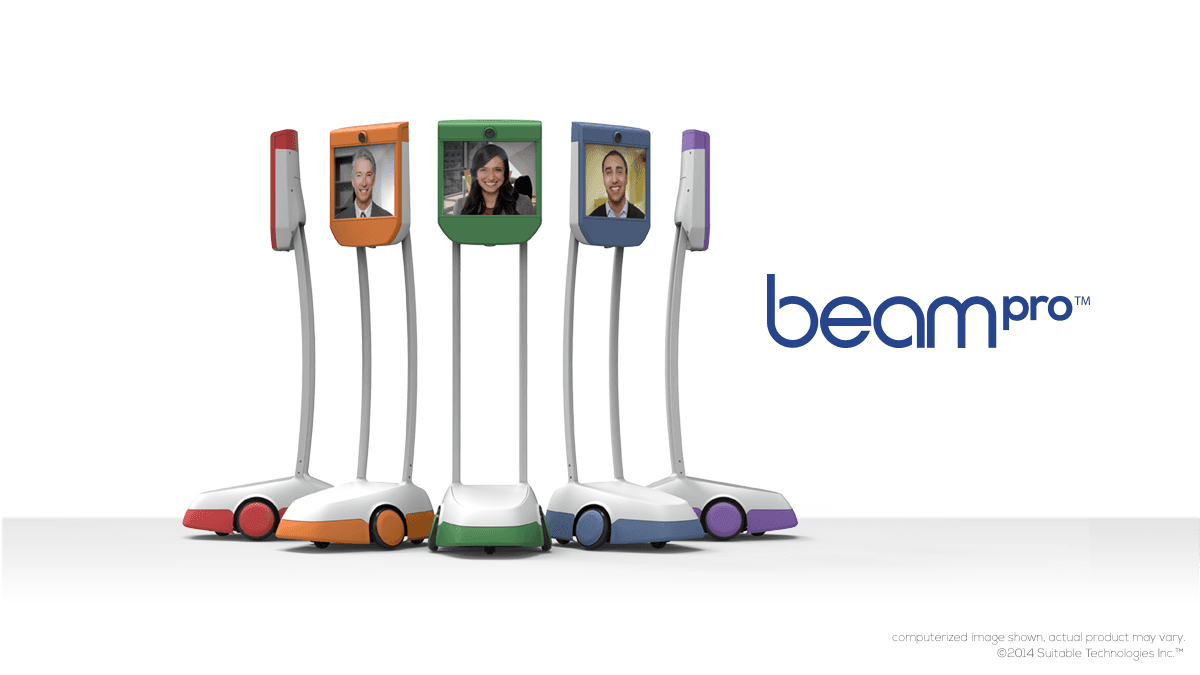 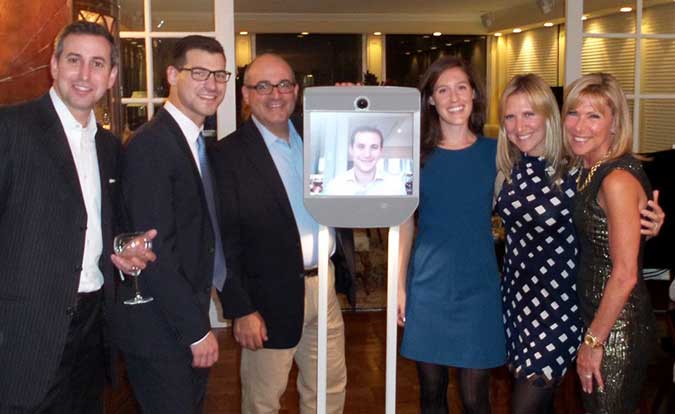 This picture of my family was taken last week. You may notice that one of my sons looks like a talking head on a video monitor. Three weeks ago, he moved to Hong Kong. This is the story of how he attended a very important family gathering (from 8,047 miles away) using his iPhone as a 3G hotspot, his MacBook Air and a remarkable device called the BeamPro from Suitable Technologies.

I became aware of the BeamPro at a trade show a year or so back. To me it seemed like a complete parlor trick. Truly, what is the point of a remote-controlled webcam? Moving it has to be clunky at best and the experience is cute, but ultimately meaningless… or so I thought.

Necessity Is The Mother Of Invention

Fast-forward about a year and I find myself with a resolute, but despondent wife planning a super important annual family gathering with her middle child half a world away. My wife is not a technologist, but she came up with the right idea. “Let’s get an eye-level iPad stand on wheels and have Brent FaceTime into the party.” She said this with a smile that was illuminated by the satisfaction of a Eureka moment. While it was a good idea, I knew there was a better one. We reached out to the team at Suitable Tech and requested a demo unit; it arrived the day before the party in three boxes.

Even for a tech-savvy expert, “some assembly required” says, “no chance this works on the first shot.” Wrong! Attach three cables, pop the video monitor on the base, plug the charging station into the wall and you’re good to go. Start to finish: 10 minutes – and seven of those were opening and unpacking the three boxes. The app downloaded in about a minute, set-up was very fast and about a minute later, I was controlling the BeamPro from my MacBook Pro. I sat in the kitchen and used the BeamPro to chase the cat around the living room. Super fun!!!

The evening of the event (morning for my son), we got the bad news. The cable company had not yet installed broadband in his new apartment. All he had was an iPhone 5 to use as a hotspot. This is worse than it sounds because in Hong Kong, even with a 4G SIM card, an iPhone 5 is only a 3G device. 3G? Even Facetime is questionable over 3G; surely the BeamPro would not fare better. Wrong!!!

Not only did the BeamPro work over 3G, it worked flawlessly. Parlor trick? No, paradigm shift… here’s why: 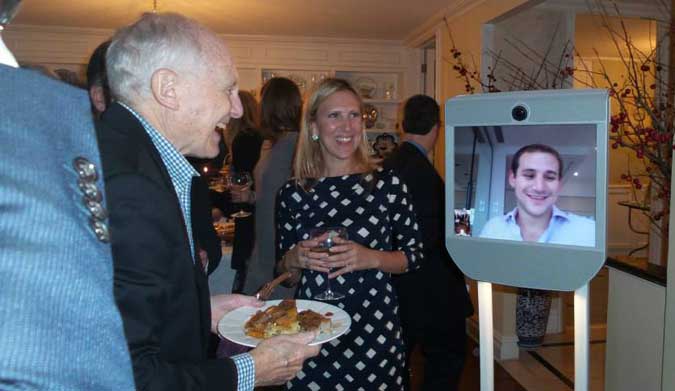 According to Scott Hassan, CEO and founder, Suitable Technologies, the BeamPro “… enables anyone, anywhere to be present, participate and interact.” My son Brent agreed. He said that using the BeamPro gave him the ability to physically act and intervene on his own behalf. He was especially struck by his ability to look other guests in the eye, hear them perfectly and carry on a quality conversation with the “sensation of full agency.” From my point of view, BeamPro is a behavior changing technology.

Beam (the company) stemmed from its founders’ frustrations with remote work. Even though lots of technology (email, chat, etc.) helped people keep in touch, the company says, “… our remote team members felt isolated, things got lost in translation, and calling multiple meetings for daily work was disruptive.” That’s when the company set out to create an “effortless remote presence.”

That said, we have several great options for video chatting online. FaceTime, Google Hangouts, Skype, Snapchat… the list is not endless, but it is very long. If your computer has a webcam or your mobile device has a front-facing camera, you probably have several good video chat client options at your fingertips. With so many inexpensive options, why would anyone think sticking a 17″ video monitor on top of a $20,000 remote-controllable robot was a good idea?

There are several reasons to like the BeamPro. The sense of agency is certainly a big one, but there are many others. As you can imagine, the BeamPro was the talk of our evening. Some people thought we had gone “Star Trek.” Others instantly adapted. Brent (a millennial with years of video game experience under his fingers) became an expert user within minutes. My wife was happy. I was happy. My son really experienced the evening; our guests all spent time with him and got some breathtaking views of the Hong Kong skyline as a bonus. Well done, BeamPro!

The unit has two wide-angle cameras: one pointed straight out and the other aimed at the floor. When you “drive” the BeamPro, the two views on the monitor become one and you quickly and effortlessly learn to navigate your remote physical surroundings. The sonic experience is truly amazing. A 6-microphone array with noise canceling capabilities makes you feel like you are in the room. You can screen share on the 17” 4:3 LCD screen or just display the image from your webcam. It is very useful for teaching or demonstrating anything.

The battery life is great, 8 hours (active), 24 hours (standby) and the BeamPro will auto-park in its charger when you hold down the “p” key. It can “walk” as fast as most people and there are all kinds of ways to change your viewing angles, speed of travel and optimize your experience.

While $20,000 is a huge amount of money for a webcam on steroids, it is not a lot of money for a BeamPro. The device is industrial grade and is built for commercial use.

However, this winter, the Beam+ Suitable Technologies will debut. This new unit will retail for under $2,000 and it will be awesome in its own right. The Beam+ will feature a 10″ LCD display, two HDR cameras, a 4-microphone array, two hours of call time and be perfect for having your son join you for a family gathering all the way from Hong Kong. 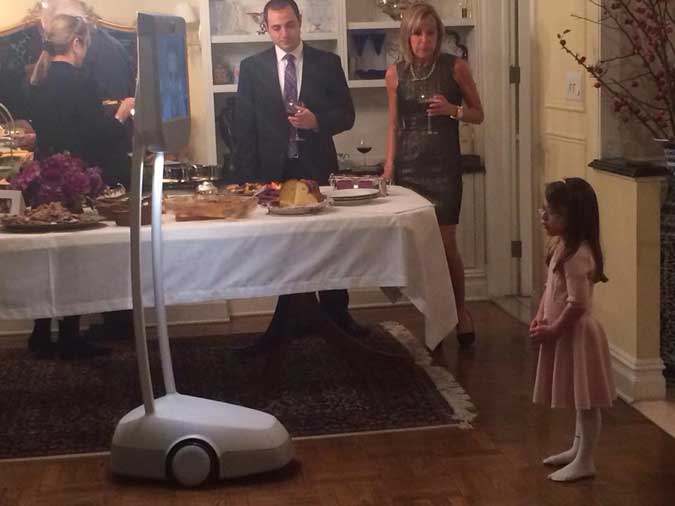 Isn’t $2,000 a little steep for a robotic webcam? Possibly, but let’s put it in perspective. A coach ticket to Hong Kong is approximately $1,700 round trip. That does not include transportation to and from the airport or hotel. So, for this use case, it’s an easy sale.

We’re going to have both the BeamPro and the Beam+ rolling around our upcoming 7th Annual Media Technology Summit on October 23 at the Sheraton Times Square. Want to get an up close personal view? Come join us. BTW, if you’ve read this far, email me for a discount code – you deserve it!