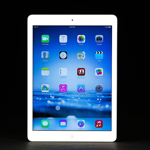 Vietnamese blog Tinhte.vn has pictures claiming to show the design of the new iPad Air, likely a dummy unit which acts as a reasonable portrayal of the device’s characteristics. Shown in white, the device is reportedley only 7 mm thin. This is almost the same depth as Apple’s latest iPhones, which measure 6.9 mm and 7.1 mm thin. As such, it also features the same recessed volume button style as the iPhone 6. The leaks show the next generation iPad to be mostly identical to the current iPad Air, but with some notable changes. Aside from thinness, the iPad now features a ‘glass’ (likely sapphire) Touch ID home button to match previous rumors. Interestingly, the side shots of the device appear to lack a mute switch. The blog speculates this was for space-saving reasons, meaning the mute switch (which can also be a rotation lock) was sacrificed in order for Apple to attain the desired thinness.

PreviousFitbit has No Plans to Play Nice With iOS 8's Health App NextWhat to Expect from Apple's iOS 8.1