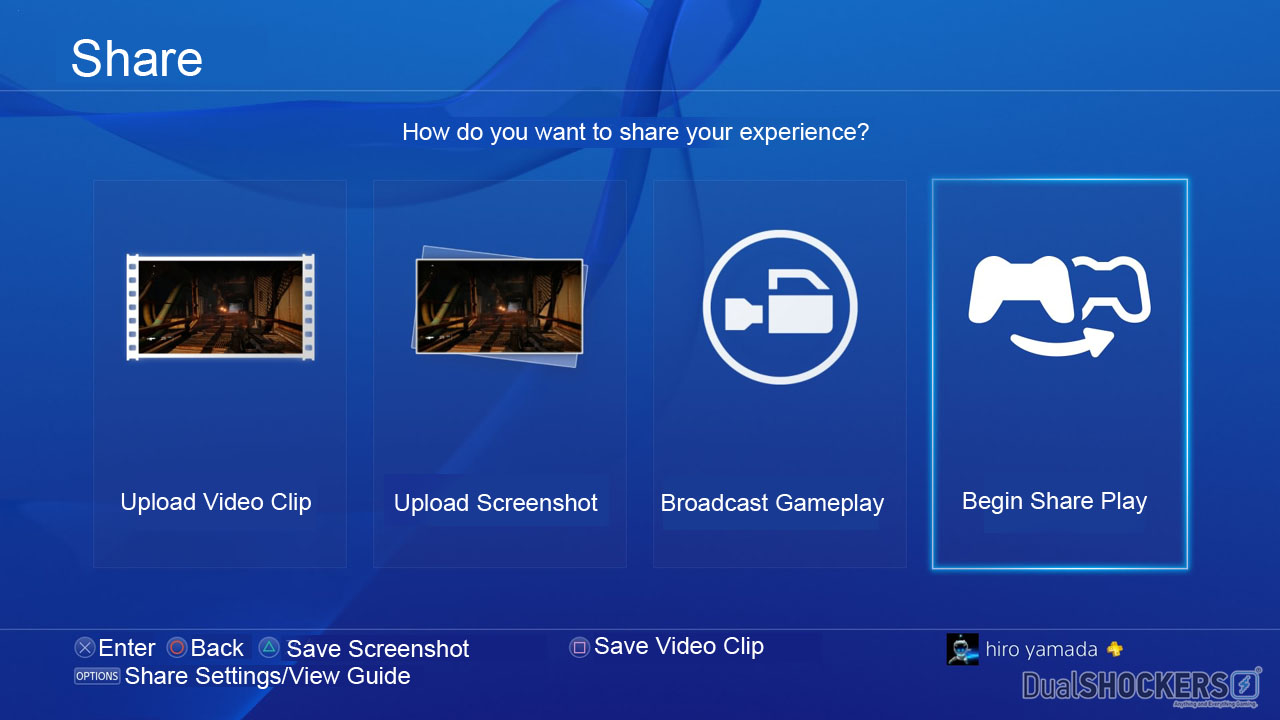 At first glance, Share Play on the PlayStation 4 is remarkable. Share Play is, basically, a virtual couch. Lots of video games have multiplayer modes already, but Share Play goes beyond that. You’re able to virtually hand a controller to a friend, anywhere in the world, to join your game or take over your game – even if they don’t own that game.

Think about that for a second. With a couple taps, you’re able to start playing a game online with a friend or family member, even if you never bought it. It’s not a demo, either – it’s the real deal, the full version of the game. That’s awesome. Gone is the indecision of whether or not you want to buy or play a certain game. If your friend has it, they can let you try it out. And it’s totally free. (As long as you’re a PlayStation Plus subscriber, which you should be.)

There are, of course, limitations. You’re only able to use Share Play in 60-minute bursts, so it’s not like you and a friend will only need one copy of Call of Duty: Advanced Warfare. But games like Spelunky, which only offer local co-op, can now be shared with friends around the world. It really is a virtual couch.

Except… Share Play can get exceptionally laggy. When you fire up Share Play, the person joining your session is streaming a version of that game. I’ve played with my friend, both as a host and a guest, and the difference is remarkable. The game looks great, whether you’re the host or the guest. But it plays so, so, so much differently. (I’d imagine it’s similar to PlayStation Now, Sony’s online video game rental service.)

For some games, that’s not a huge deal. There are plenty of games that don’t require hyper-accurate button pushes and precision timing. Share Play is great for those kinds of games. But for any game where the difference between life and death is a quarter of a second… well, Share Play falls short.

And therein lies the rub: Share Play is not for “serious gamers.” It’ll get you killed every time in shooters, and even more frustrated in roguelikes. Even puzzle games that require proper timing will fall short.

But maybe that doesn’t matter in the end. Share Play will be a great tool for casual gamers. It could let grandparents play along with their grandkids, no matter how far apart they are. It’ll let you check in on your friends’ games, to see if they’re worth your time or money. The possibilities are (almost) endless… as long as you’re not expecting a perfect playing experience.

Joey is the Manager of Content and Community at ShellyPalmer. With a journalism degree from Ramapo College of New Jersey, he's a die-hard Minnesota Vikings fan, enjoys watching movies and loves all most things tech. You can follow him on Twitter @soulpopped. He's also the co-host of the award-winning* podcast "Sports 4 Starters." (*Note*: No awards actually won.)

PreviousShelly Palmer Shows Off Some Great STEM Smart Gifts on Good Day Wake Up NextAre We in a Tech Bubble? All Signs Point to Yes