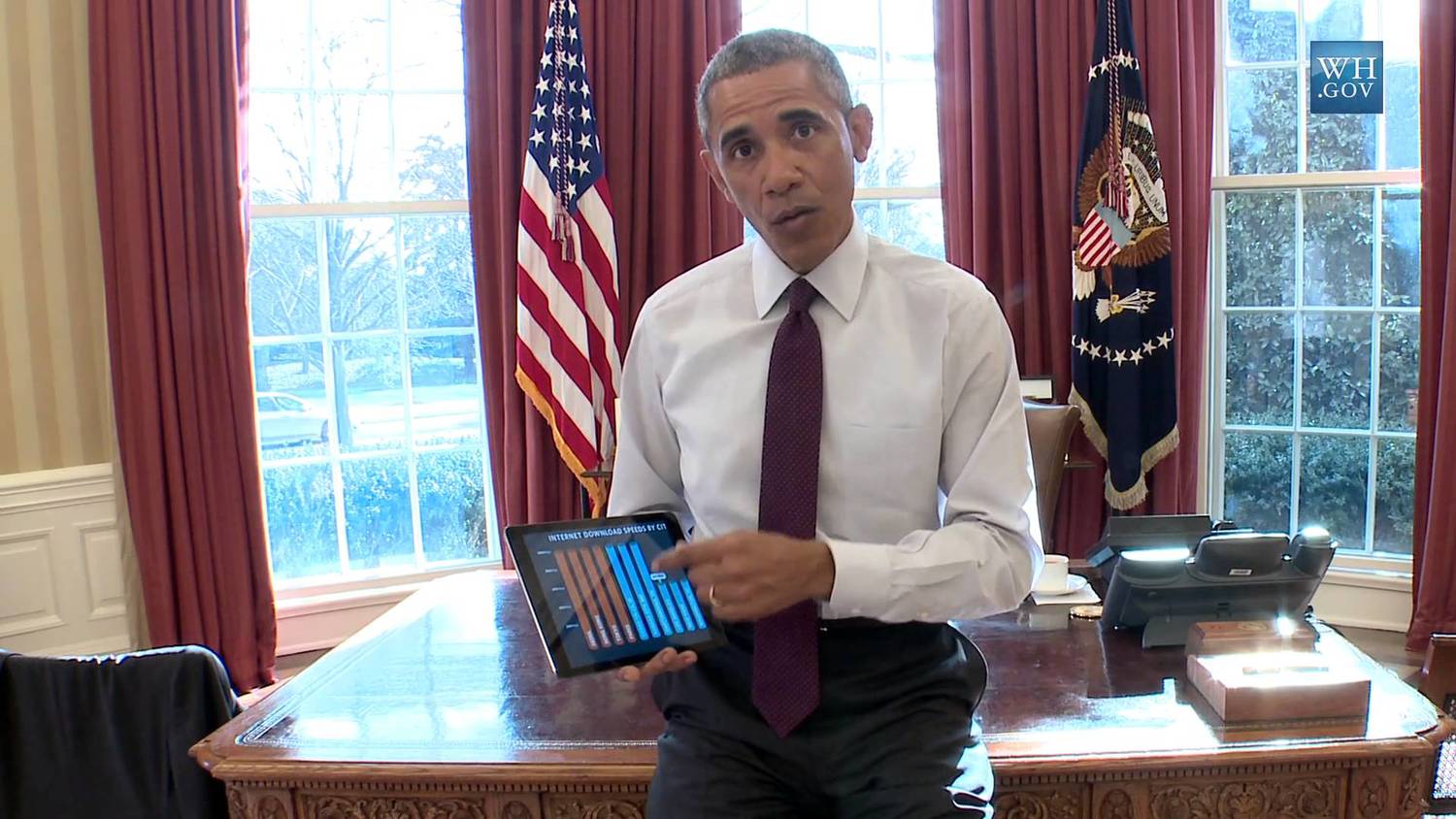 According to a White House fact sheet, President Obama has announced “steps he will discuss in the State of the Union to help more Americans, in more communities around the country, get access to fast and affordable broadband.”

The fact sheet goes on to say, “High-speed, low-cost broadband is paving the way for economic revitalization not just in Cedar Falls, but in places like Chattanooga, TN, Kansas City, MO, and Lafayette, LA — all of which have Internet speeds nearly 100 times faster than the national average and deliver it at an affordable price.”

The magic broadband speed in this writing seems to be “1 gigabit per second.” The fact sheet does not say whether or not the connections are symmetrical or, as our friends at Verizon like to say, “half fast.” No matter – this kind of scientific sounding technospeak is pretty irresponsible.

Not All Homes Are Created Equal

Saying that every household in America needs a 1 gigabit per second broadband connection like saying every household in America needs a 1000 Amps of AC power. Some do… some don’t. (In case you’re not an electrical engineer, depending upon when it was built, where it is and how big it is, your house has somewhere between 60 and 120 amps available. 1000 Amps would be like giving each home as much power as an average factory uses.)

While I vigorously applaud and strongly love the idea of affordable broadband for everyone, a workable national broadband policy has to respect the difference between equality and fairness.

If you do some email, browse the web, access some files stored in the cloud via the public Internet, stream a little music and watch an occasional video, you don’t need anything like a 1 Gbps broadband connection – and certainly not a symmetrical one.

On the other hand, if you are running a financial services business, or if you have 2,000 employees online all day, you may need significantly more bandwidth to meet your needs.

A Matter of Nines

Then, there’s quality of service (QOS). What is your tolerance for uptime?

Commonly referred to as Three Nines, Four Nines and Five Nines, all telecommunications and electronics manufacturing companies use some version of this benchmark to describe the quality of their services. Most consumers can probably live with three nines of broadband service. Healthcare and financial service firms might strive for better than five nines of service. What is the President’s vision for affordable broadband QOS? While everyone would love five nines of service, is it reasonable to assume that it would cost the same as three nines of service? Do you need five nines of service to watch an occasional video, read emails and browse the web? You might. If so, shouldn’t it cost more?

I explored this and other related issues back in August 2009 when the FCC was working on the first National Broadband Plan document. I asked a simple question, “What’s a bit?” It’s an article worth looking over because it asks questions the Administration should have been asking back then. The article asks how a policy maker might determine the difference between how a bit (a unit of digital information) that is used for a phone call, a bit used for video, and a bit used for data transfer, are taxed. To a computer, all bits are the same, but not to the tax collector. This is also not contemplated in the 1 Gbps for everyone scenario.

Lastly, and maybe most importantly, there are several ways to achieve fair, affordable access to the public Internet that are not on the table. Mesh networks, load balancers, femtocells, wireless repeaters, etc, all could be combined into powerful mashed up access points utilizing wired and wireless technologies. We don’t have to run fiber optic cable to every household in America – it would be nice, but it’s not a requirement for US digital sovereignty.

The United States of Fiber Optics

That said, maybe the vision is for a wired America where a fiber optic access point is literally available to every man, woman and child in the USA. I would love to live in that America. While we’re at it, let’s add 1 Gbps wireless connections for every one of the billions of devices that will make up the Internet of Things – including, our automobiles.

If that is the vision, we’re going to need real investment in infrastructure – where will the money come from? What type of investor will invest in a long-term infrastructure play designed for non-premium, price sensitive consumers? You already know the answer… it’s us, the taxpayers.

History tells us what we’re up against. If you’re happy with your municipal power company, you’ll probably love your municipal Internet service provider (ISP). And, while it’s true that no one likes their cable bills, phone bills, gas bills, water bills or any other bills for that matter… in the end, I’m not sure Uncle Sam’s bill is going to be that much lower.

PreviousBOLD – How to Go Big, Create Wealth & Impact the World NextHow to Apply for a Job Even If the Company Isn't Hiring