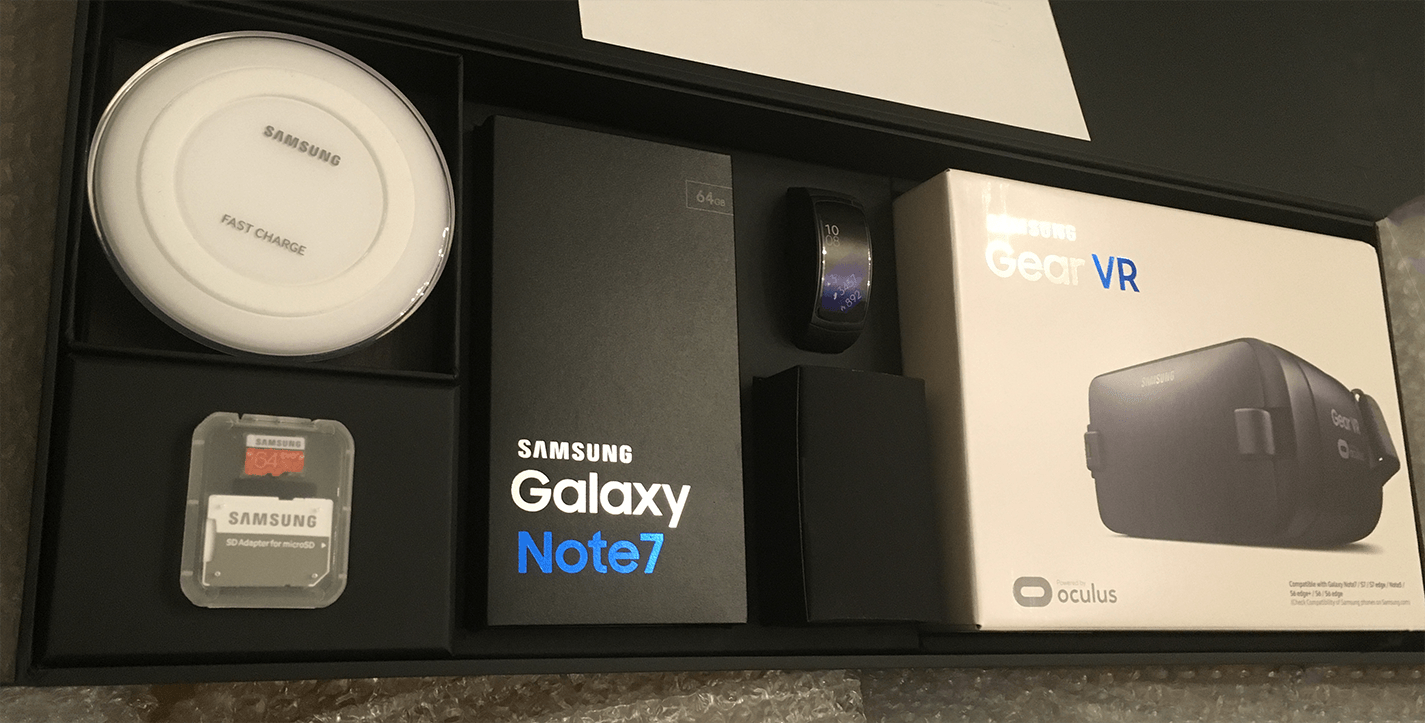 Update: Samsung is working with the U.S. Consumer Product Safety Commission (CPSC) to investigate the recently reported cases involving the Galaxy Note7 and is asking its carrier and retail partners globally to stop sales and exchanges of the Galaxy Note7 while the investigation is takes place.

Consumers with a Galaxy Note7 should power down and take advantage of the remedies available, including a refund at their place of purchase. For more information, consumers should visit samsung.com/us/note7recall or contact 1-844-365-6197.

The Galaxy Note7 is Samsung’s newest, fastest and best handheld to date. Rather than dress up the very successful Note5, Samsung skipped a generation (by number only) and dubbed the new device the Note7 to bring it into line (in features, look and feel) with its Galaxy S7 and S7 Edge. That said, the Note7 (which runs Android 6.0 Marshmallow OS) has some excellent new features that separate it from its Galaxy siblings and make it the perfect device for business people who need enhanced productivity and for normal people who want a flexible device that will let them express themselves in fun and easy ways. 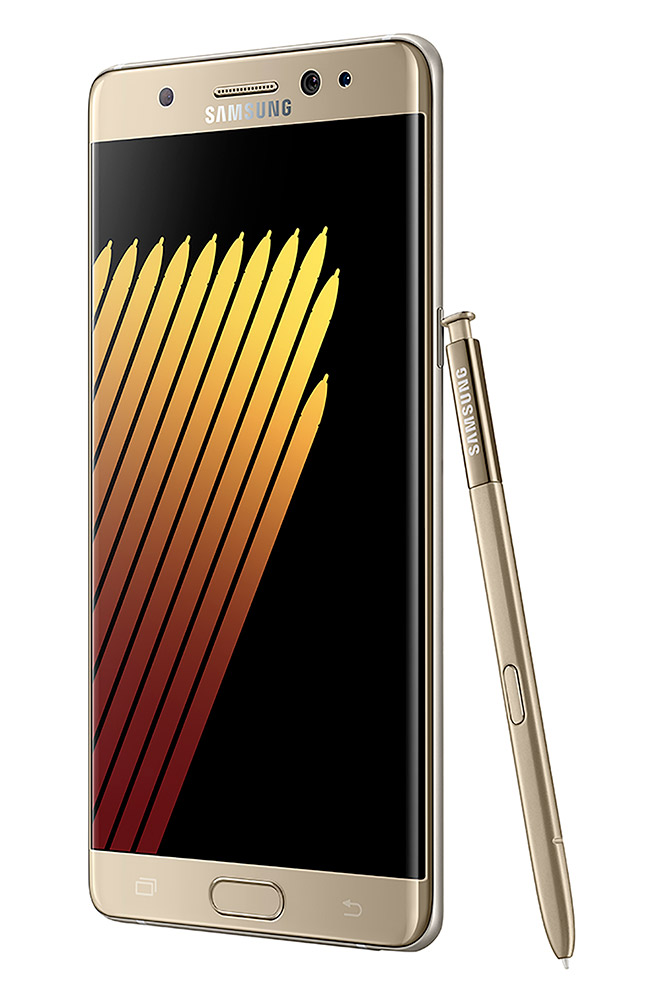 There is a laundry list of new features that, while not paradigm shifters, are super nice to have, including these:

Smart S Pen – it can translate text and take scrolling screen shots, and you can write on almost every screen the device can display. There’s no need to open the Note7 to jot a note; you can just pop out the S Pen and scribble what you need to scribble right on the lock screen.

Awesome Gif Maker – is it pronounced Jif, like the peanut butter, or Gif, with a hard “G?” Steve Wilhite (who invented the file format in 1987 while working at CompuServe) says it’s pronounced Jif, like the peanut butter. But no matter how you pronounce it, the Note7 has an awesome Gif maker. Select the video you want with the S Pen, crop it, save it and you’re done. It could not be faster or simpler.

Knox Security Folder – Samsung took its industrial-strength Knox Security protocol and built it into the Note7. You can have as many password-protected files and folders as you like, but you’d better remember the password because if you forget it, no one (not even Samsung) can recover it for you. Considering what’s going on with nation-state hacking, this is a feature whose time has come.

Smaller Is Bigger – The dual-edge 5.7″ Super AMOLED screen on the Note7 is the same size as its predecessor, but the Note7’s case is a bit smaller than that of the Note5, so the phone feels smaller and is easier to hold. If you really need to know, the main display is Quad HD (2560 x 1440), which means it’s breathtaking.

Low-Light Camera – The dual-pixel 12.0 MP (megapixel), rear-facing camera takes great pictures outdoors or in well-lit environments, but it is a superstar at night or in darker environments such as candlelit restaurants, night clubs and evening strolls. The Note7 shoots video in 4K UHD (ultra-high definition). For my videophile friends, that’s 3840×2160@30 fps. The videos will play beautifully on your new 4K flatscreen.

It’s IP68 compliant or, to put it another way, “water-resistant in up to 5 feet of water for up to 30 minutes.” Now there’s only one body of water that the Note7 absolutely has to resist (and we all know what that is). The question is, even if the device is undamaged, are you going to put your hands in there to get it? BTW, “IP” is an abbreviation for “international protection marking.” In this case, the “6” means, “Dust tight – No ingress of dust; complete protection against contact (dust tight). A vacuum must be applied. Test duration of up to 8 hours based on air flow.” And the “8” means “Immersion, 1 meter (~3 feet) or more depth – The equipment is suitable for continuous immersion in water under conditions which shall be specified by the manufacturer. However, with certain types of equipment, it can mean that water can enter but only in such a manner that it produces no harmful effects.” Now you are an IP68 expert.

All of the Note7’s other specs are best-in-class. Simply put, it’s the best handheld Samsung has ever made.

Some people say the downside of having a state-of-the-art handheld device is that you really can work from anywhere. In fact, according to US News & World Report, a recent report by Ernst & Young stated that “one in three full-time employees in some of the world’s largest economies say maintaining a healthy work-life balance has become more difficult in the last five years.”

If this problem truly impacts 33 percent of the workforce, Samsung’s Note7 may be the solution because while you can do almost any kind of office work on the device, you can also play like a champion! I wrote a radio script during a cab ride today and while waiting at the studio, I finished a PowerPoint presentation (in 16×9 HD, BTW) that got me a round of applause. I also shared a couple of pretty funny Gifs with my FB friends on my way home. Yes, you can work hard on a Note7, but you can also play hard. 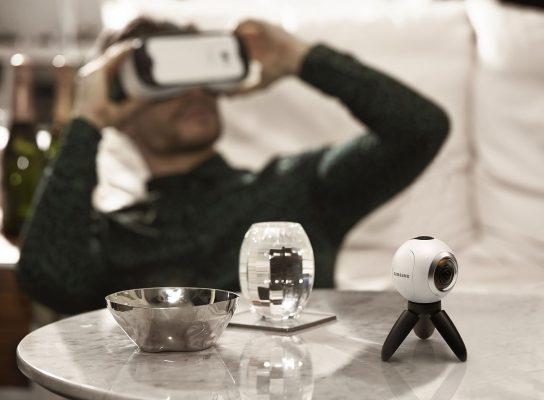 There is far more to 360-degree photography than fun. Designers, real estate agents, people in the kitchen and bath industry, or anyone who might benefit from 360-degree videos or stills, now have a simple way to create them and put them online. And if you pair these pictures and videos with a Samsung Gear VR headset, the viewing experience is immersive.

The Note7 is just the latest device in an ever-evolving Samsung ecosystem that includes smartphones, a 360 camera, an inductive charger, fitness bands, VR headsets, enhanced security and more. While on paper the features may look iterative, you will marvel at the frictionless stitching of 360 pictures and videos, the increased productivity provided by the S Pen and the visceral pleasure of simply working and playing in the world of Samsung. The bottom line: If you’re an Android person, and even if you’re not, the Note7 and the rest of the Samsung ecosystem will command your attention.