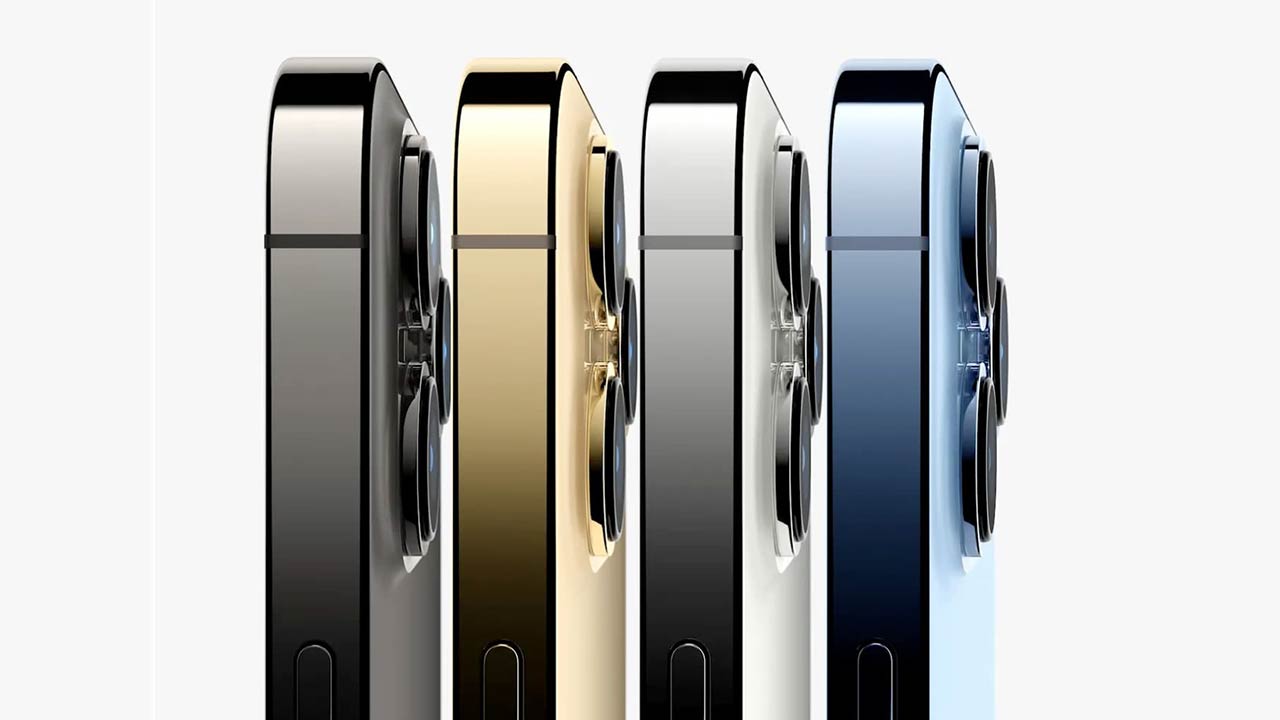 On Tuesday, Apple unveiled the iPhone 13, as well as new iPads, new Apple Watches, and more. Here’s everything new that you need to know from Apple’s “California Streaming” event.

The newest iPhone is here, and it’s lucky number thirteen. There are four models to choose from: the iPhone 13, iPhone 13 mini, iPhone 13 Pro, and iPhone 13 Pro Max.

The phones’ displays are the same size as last year (the iPhone and the Pro are 6.1”, the Pro Max is 6.7”, and the mini is 5.4”), but they have a 20% smaller notch (which means more display area) and 28% brighter screens. Powered by the all-new A15 Bionic chip, Apple says the iPhone 13 series has the “fastest CPU on any smartphone.” The Pro and Pro Max both have a six-core CPU and five-core GPU.

As has become tradition, Apple once again upgraded its cameras. There’s a new 77mm Telephoto lens (plus Ultra Wide and Wide lenses), all with sensor-shift stabilization to reduce camera shake. There’s also a new “Cinematic Mode” that uses machine learning to track objects and people, blur the background of videos in real time, and rack focus. Very cool.

With a bigger battery (and smarter software), Apple says the iPhone 13 will last an extra 2.5 hours between charges. Another upgrade this year: no more 64GB storage option, as the entry level is now 128GB. The iPhone 13 Pro and Pro Max are also the first iPhones to offer a 1TB storage option. 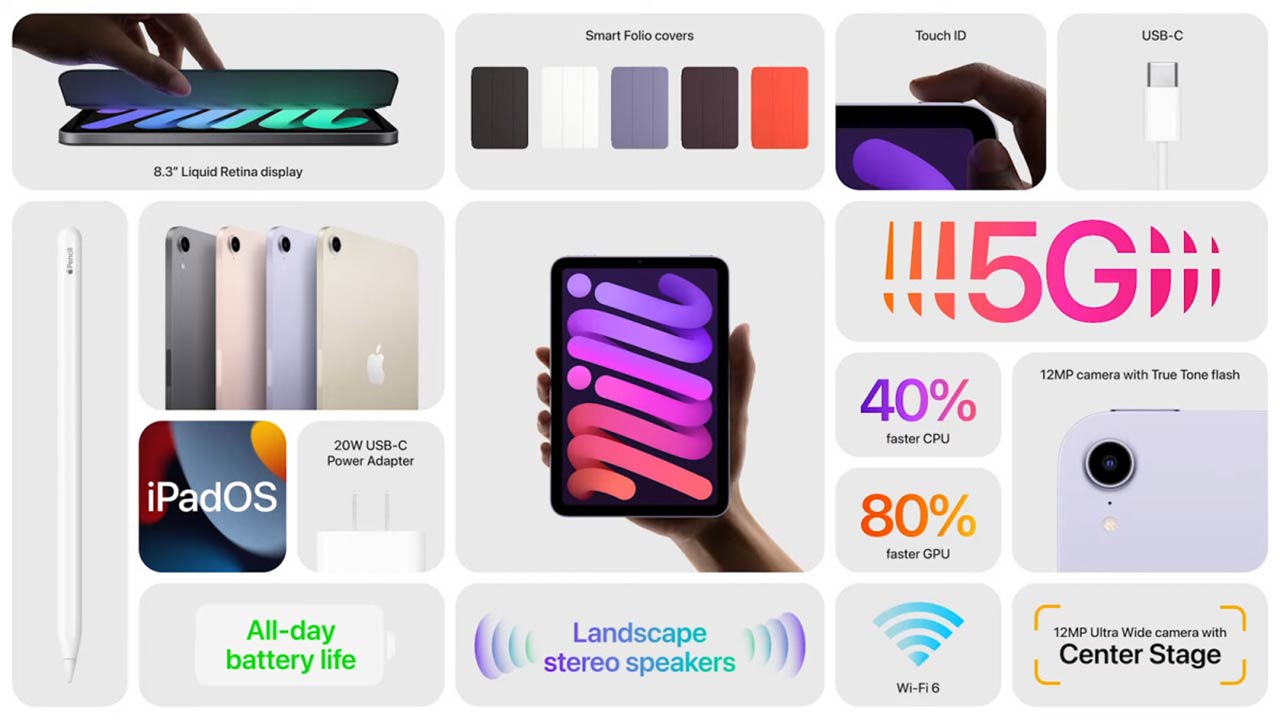 The newest iPad (9th generation) is powered by an A13 Bionic chip (which means 20% faster performance), has a nicer front-facing camera, and comes with a True Tone display. It starts at $329.

The new iPad mini (6th generation) got more of a facelift than its bigger, older brother, in what may be its biggest upgrade to date. It now packs a larger (8.3”) Liquid Retina display, embedded Touch ID (in the power button, now that the home button is gone), a USB-C port, and 5G capability. It also features a True Tone display. Apple says the new mini is 40% faster in CPU performance and has 80% more GPU power. It starts at $499.

Both new iPads include Apple’s “Center Stage” technology, which automatically detects what’s happening during a video call and crops the image to the important part of the frame in real time. That means video conferences with your technologically-challenged family and friends just got a bit less painful. (They still may not be fun, though.) 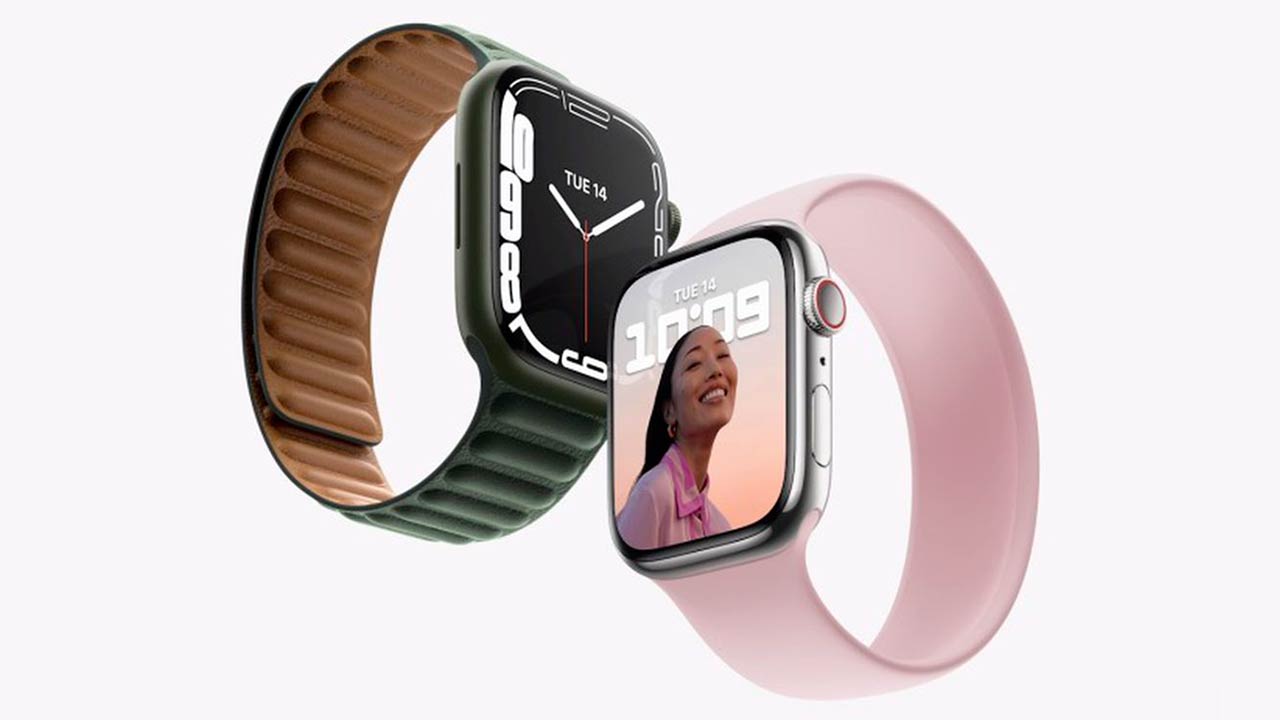 There’s a new Apple Watch, too, with bigger displays, softer edges, and a thinner bezel. That thinner bezel plays a big factor; the watch face itself is barely bigger (just 1mm bigger than the previous model) but the display is now 20% bigger. Apple says the screen can fit 50% more text than previous models and now features a Retina display.

The new watches are also more durable and charge 33% faster, include a new text input feature with AI predictions, and now rate IP6X. Also, for the first time, there’s a full keyboard on the Apple Watch. YMMV if your fingers are small or adept enough to use it. The new Apple Watch starts at $399.

The new watches also include new health and safety features around biking. When you start a ride, it’ll remind you to start your workout and can automatically pause and resume your workout if you take a break. A bigger deal: the new fall detection feature, which (like other versions of fall detection the Apple Watch tracks) can contact emergency services if needed. More of an indoor rider? The Apple Watch also more accurately reflects calories burned on e-bikes (like Peloton).

New to Apple Fitness+ are Pilates workouts and guided meditations, as well as group workouts, where family and friends (up to 32 at a time) can join your workout via AirPlay. For those (like me) who can’t wait to hit the ski slopes again this winter, Apple is bringing seasonal themes to its workouts, starting with ones aimed to get you in shape again for the skiing/snowboarding season.

Apple also unveiled a new MagSafe wallet that works with its “Find My” service to help you find your wallet if it detaches from your iPhone. It’s a nice twist on the tech introduced last year, when Apple rolled out MagSafe for the iPhones so you could mount cases, wallets, tripods, and more to the back of your handset. There are also new cases, if you want one made by Apple.

Apple announced that iOS 15, iPadOS 15, watchOS 8, and tvOS 15 will release on Monday, September 20. There was no word on macOS Monterey, which we’ll likely learn more about when Apple unveils new Macs later this year.

PreviousBringing back the woolly mammoth NextDo You Need an iPhone 13?