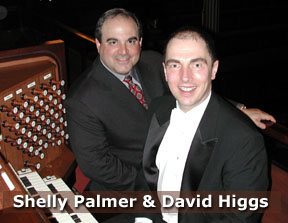 Shelton Leigh Palmer is an award-winning composer and producer of music for every form of mass media, including cutting edge digital and Internet technologies. His company, Shelly Palmer Productions, has evolved since its founding in 1982 from a prestigious music supplier into one of New York’s premier full-service creative and production companies.

Among Palmer’s significant artistic achievements was the composition of Anthem, choreographed by David Parsons. Palmer conducted the London Symphony Orchestra for the recording. He was also invited to Russia to conduct the Radio Symphony Orchestra of Moscow for the 1988 Goodwill Games, a rare honor for an American then. Nonetheless, Palmer is perhaps most easily recognized as the composer of themes and background music for a multitude of major television programs, from “Spin City” and “Live with Regis & Kelly” to the identification package for cable networks like MSNBC, as well as literally thousands of memorable commercial jingles for clients ranging from MCI to American Express to Burger King. For these efforts he has twice received major awards from ASCAP.

Baseball fans fondly recall one of the first music videos he created and produced: LET’S GO METS celebrated the World Champions of 1986 and quickly “went platinum.” Now, Palmer is also widely recognized as one of the most talented and prolific producers of national TV and radio spots and even full advertising campaigns.

Stepping boldly into the future, Palmer is credited with inventing the current implementation of Internet Enhanced Television, he holds two U.S. patents and has presented several papers on musical technology to the prestigious Audio Engineering Society. He is Chairman of the New Media Committee of the National Academy of Television Arts and Sciences, and is also a valued member of other industry associations, from the National Academy of Recording Arts and Sciences to the Screen Actors Guild, a measure of his wide-ranging talents and interests. Music may be foremost, but when obligations of work and family allow — he is married to acclaimed designer Debbie J. Palmer and they have three children — his hobbies range from karate and astronomy to physics and comparative religion.

Upon first playing the then-unfinished new organ at Central Synagogue, Palmer realized that both the instrument and the occasion profoundly demanded a brand new work from him. It was to be his gift to Zee, Michael and Jenny Wiener in memory of their son and brother Gabe, whom he knew professionally as well as personally. This organ suite, “T’filat Gavrieyl,” is the result.

The Suite opens with a horn call inspired by the sound of the Shofar (the ram’s horn used traditionally to announce the Jewish New Year). The first melodic element is a partial quote from Kol Nidre, the prayer sung on the eve of the Day of Atonement; then the piece continues with new themes and variations designed to explore the wide range of colors possible on such a majestic organ.

The second movement is entitled “Prayers,” wherein the composer explores musically some of the varied ways mankind seeks comfort through prayer, from those said alone to others uttered within a congregation of worshipers. There are angry prayers, questioning prayers, solemn prayers and of course, joyous prayers of affirmation. This movement embodies, via musical colors, the emotions worship evokes while seeking to understand the unknowable mind of God.

The third movement is a pure celebration of virtuoso skill wedded to a virtuoso instrument. It is fast and joyous with a hint of “inside” musical humor. It was originally conceived for orchestral accompaniment, until the composer heard what a great soloist like David Higgs can accomplish alone on such a magnificent French Symphonic organ. He then reworked this movement into an allegro solo with a blazing cadenza. The piece ends as the High Holidays end, with the call of the Shofar. – Alan Wagner