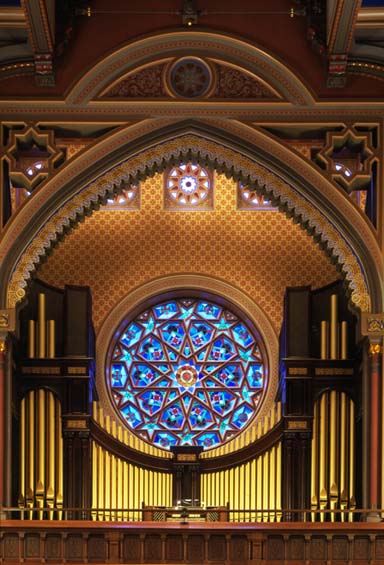 The Gabe M. Wiener Memorial Organ at Central Synagogue is an extraordinary instrument commissioned and built for the specific requirements of the congregation’s worship services and music program. It was presented to Central Synagogue by Zena, Michael, and Jenny Wiener in celebration of the life of Gabe M. Wiener, his love of the instrument, and his passion for music; in the hope that future generations will find inspiration in the superlative music that only an instrument of this quality can produce.

Constructed by the renowned firm of CasavantFrères of St. Hyacinthe, Canada and completed in 2002, the organ consists of two distinct, interconnected instruments: a Bimah Organ (Casavant Opus 3812) located on both sides of the bimah and used primarily during services to accompany the cantor, choir, and congregation; and a larger Gallery Organ (Casavant Opus 3813) located in the elevated rear gallery and used both for services and concerts.

The Gabe M. Wiener Memorial Organ contains two consoles and 4,345 pipes, 55 stops, and 74 ranks, located in the front and back of the sanctuary. It replaces a 1926 organ by of 1,552 pipes that was destroyed in the fire that damaged the synagogue in August 1998. (That instrument had replaced the original Jardine organ of 1880.)

The Bimah Organ, with Choeur, Echo, and Pédale divisions (groups of pipes) was installed and voiced in July 2001, in time for the rededication of the sanctuary on September 9, 2001. The Gallery Organ, with Grand Orgue, Récit, Positif, Solo, and Pédale divisions, was installed and voiced in March 2002. Both coordinate in style and materials with the design of the restored sanctuary. The entire instrument was dedicated at a concert on April 10, 2002, by concert organist David Higgs and the Orpheus Chamber Orchestra which included the premiere of T’filat Gavrieyl (Gabriel’s Prayer) a suite for organ in D minor composed by Shelly Palmer. 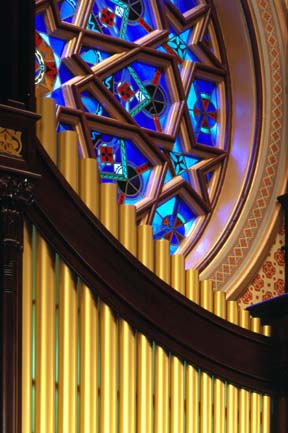 The organ contains two very special stops created specifically for Central Synagogue: a Trompette Shofar, that replicates the sound of the traditional shofar, used for services on Rosh Hashanah and Yom Kippur; and a Klezmer Clarinette, that reproduces the sound of a klezmer clarinet with great brilliance and clarity, believed to be the first such organ stops in the world. Composer, producer and digital audio pioneer, Shelly Palmer sampled and modeled the acoustic instruments to aid the organ builders in crafting these unique stops, both are used to enrich the accompaniment of contemporary anthems and liturgical music. The instrument also contains a rich array of other reed registers, including a Trompette-de-Fête that can sound out over the entire organ, and a 32-foot Contre-Bombarde in the pedal division that provides floor-shaking bass to the full ensemble.

The organ was designed by Pierre Dionne, President of CasavantFrères, and Jacquelin Rochette, Associate Tonal Director, in conjunction with George B. Stauffer and Shelly Palmer, who served as organ consultants for Central Synagogue. It is the product of three years of planning and a cumulative total of 21,000 work-hours by Casavant’s artisans and musicians.

To fully enhance the experience of worship and music in the sanctuary, Central Synagogue commissioned a specially designed advanced sound system. The Main Sanctuary Sound Reinforcement System provides clear intelligible reinforcement of speech and music to every listener in the congregation with more than 40 loudspeakers located throughout the sanctuary. The use of a large number of smaller loudspeakers, combined with advanced digital signal processing, allows the listener to hear the sound as though it is coming from the bimah, rather than a loudspeaker, with reduced visual impact.

A separate Reverberation Enhancement System helps to create an acoustical environment favorable to a concert organ. It incorporates four small microphones hung from the ceiling to pick up sound generated within the room, process it, and feed that sound back into the sanctuary as additional reverberation. This system improves the amount, tonal balance, and spatial aspects of the reverberation within the sanctuary and enhances congregational singing and responsive worship.

console: The desk from which an organ is played. It includes keyboards, a pedalboard, stop knobs, and other devices required to control the sound of the instrument.

coupler: A device that connects one division of an organ with another, so that both can be played from a single keyboard or pedalboard.

division: A separate section of an organ containing its own characteristic pipes, which are grouped together in one location and played from a single keyboard or pedalboard.

MIDI (Musical Instrument Digital Interface): A device that allows synthesizers, drum machines, and computers to interface with a pipe organ through inputs in the console.

pipes:  The source of musical sound on an organ. Pipes may be made of wood or metal, and they may be open or stopped with caps. Their pitch depends on their length and nature, and their tone depends on their shape and the material from which they are made. Each pipe produces a single tone and is linked to a note on a keyboard or pedalboard.

pistons:  Buttons located underneath the manuals that are used to control the stops and couplers.

rank: A complete row or set of pipes, usually of the same type, controlled by a single draw knob. A simple rank contains one pipe for each note of the keyboard or pedalboard.

reed stop: A special type of pipe in which the sound is produced by a vibrating metal tongue. Such stops are commonly used to reproduce the sounds of orchestral brass instruments (trumpets, horns, etc.) and reed instruments (oboes, clarinets, etc.).

stop: A term denoting a specific rank of pipes, or group of ranks (in the case of a compound stop), that is activated from the console by a draw knob or stop.

toe studs: Large buttons located above the pedalboard that are used to control the stops and couplers.

transposer: A special device that allows the sound of the organ to be mechanically transposed upward or downward.

voicing: The process of refining a pipe so that its timbre, loudness, and speech are given their desired quality and uniformity.