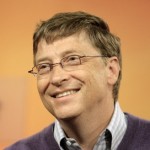 This article appeared in the New York Post.  It’s priceless.  There’s Sabre rattling and then, there’s Sabre rattling.  On a more specific topic, you can be sure that the cell phone purveyors are thinking about a phone-based MP3 world.  But, as history has so often shown — thinking doesn’t mean you going to get it right!

“I don’t think the success of the iPod can continue in the long term, however good Apple may be,” the former chairman of Microsoft, the world’s biggest maker of computer software, was quoted as telling German daily Frankfurter Allgemeine Zeitung yesterday.

“I think you can draw parallels here with the computer — here, too, Apple was once extremely strong with its Macintosh and graphic user interface, like with the iPod today, and then lost its position.”

The iPod is one of the world’s most popular portable digital music players, with more than 15 million sold since they were introduced.

But makers of mobile phones are targeting the device — unveiling models that feature not only phones, but onboard music players so users can download their music from services directly to their phones.

Sony Ericsson and Nokia have models, and more are being made by others, including Samsung and Motorola, which is working with Apple directly.

PreviousWhat is the Internet? NextGMA First to HD