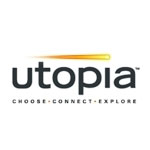 Tweet Article Share Article on Facebook Email Article Share Article on LinkedIn
According to its Web site, “UTOPIA (Utah Telecommunication Open Infrastructure Agency) is a Utah interlocal agency with 18 founding cities (Provo is not included) dedicated to accelerating economic development and quality of life for its citizens and businesses by deploying a publicly-owned advanced telecommunications network to all premises within member communities.”

How would a gigantic fiber-optic connection to the public Internet through a local municipal provider change your world? Is it a good use of your tax dollars? Are people entitled to completely commoditized, almost free, 100 Mbps broadband connections in the same way they are entitled to clean water, police protection, sanitation, sewage? Is the Internet a privilege or a right?

The proposed Utopia project would not put Provo City in the retail ISP business. The proposed business model resembles a municipal airport. The infrastructure will be owned by the city, but the services will be provided by private companies.

One very interesting aspect of this project is that they chose fiber-to-the-home (as opposed to wireless). Here were their reasons:

1) Wireless is a promising technology but will never provide the bandwidth of fiber. Fiber bandwidth (ability to carry information) is tens of thousands times larger than that of wireless.

2) Wireless technologies typically use unlicensed frequencies and are highly susceptible to interference.

3) Wireless technology, by its very nature, is not as secure as wired.

4) Wireless technology has line of sight and distance limits and is affected by weather.

Unless you’re moving up from a dial-up or very old, slow broadband service, a virtually unrestricted fiber optic broadband connection to your house will not change the way you live at all. Web browsing might be a little bit faster, VoIP calls might not overwhelm your system and you’d probably be able to get a decent IPTV service over such a network. Certainly streaming and IP video offerings would work much better, but I don’t think it will be life-changing.

We should watch iProvo and Utopia with interest. We’re not only going to learn quite a bit about how bandwidth affects behaviors, we’re going to see an up-close and personal demonstration of consumer aspiration vs. deployed innovation. Will people actually spend their hard-earned dollars for super high-speed access? That learning may lead us closer to a true utopian, connected world.