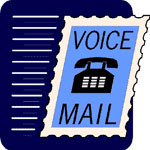 Tweet Article Share Article on Facebook Email Article Share Article on LinkedIn
I remember the day, back when the Earth was cooling, when I got my first up close and personal lesson in the fledging art of business voice mail etiquette. My client’s VP Sales had left me a message that made me barking mad. He was about to interfere with a program that had literally taken me six months to sell in and I was not happy at all.

As soon as I found out, I called his office. To my very great surprise, he did not have a secretary; I was greeted by voice mail. After the beep, I let loose on this guy. It was a five-minute vitriolic diatribe. I even left spaces for him to answer (which he didn’t because I was yelling at a recorder).

A day later, my client called me and asked if I had had words with her VP Sales. I said, that I hadn’t but that I was going to kick his ass when I spoke to him. She asked me if I thought that there was anyone at her company who didn’t know I was on the warpath? This question caught me off guard. “What?” I asked. “Nobody knows about this except you, me and your moronic sales guy.” She started to laugh out loud and said, let me play something for you. She proceeded to conference in her voice mail system and playback the entire five-minute message. Her VP Sales had forwarded it to absolutely everyone in her company. Ouch!

Considering my technical background, you would think that I would have been smarter than that. But, 25 years ago, the “conventions” of voice mail messaging had not become part of our business culture or our social consciousness. I learned my lesson. It is, of course, the same lesson you might apply to email. Do not say anything on voice mail or write anything on email that you would not be comfortable seeing on the front page of the New York Times. As you can imagine, this was a very expensive lesson. It was well learned.

Fast forward to 2007 and look at the news this week. A group of teenaged girls in Florida lured a 12 year old to a clearing and videotaped her as they beat her up. Then, just for fun, one of them uploaded the video to a video snacking site. Wow! One would think that a digital native (kids born into the digital age) would know that everyone on Earth would have access to this content which begs the questions: Did they think this through? Did they want to get caught? Or, are they just really stupid kids?

But, ponder this scenario. Over the weekend, one of my closet friends asked me for some advice. This person is one of the highest-ranking executives at a very large, publicly traded financial services firm. As it turns out, an entry-level employee who feels that they had been exposed to a hostile work environment is blackmailing them. As proof, the employee is threatening to put a damning video on YouTube. My friend asked me how they can prevent this from happening? Obviously, they can’t. If everyone has access to small inexpensive video capture tools and everyone has access to the public Internet then everyone can upload a video. Ouch!

My friend, who is a lawyer, said, “we don’t negotiate with blackmailers!” And I replied, “do you have a good crisis management PR firm … if this goes online, you’re going to need one.”

Not much comfort for a corporate executive faced with a new technology criminal. But, is that person really a criminal? After all, if they really are being exposed to a hostile work environment, shouldn’t someone know about it? Shouldn’t this company be willing to look at the tape in advance and solve the problem? In this particular case, the aggrieved employee did not give management the option of fixing the problem — they went straight to blackmail. Which begs another question: If you have Final Cut Pro or iMovie or Video Vegas, how hard is it to fake this tape? The answer should be obvious; it’s not hard at all.

Of course, stupid video tricks are not limited to amateurs. Just ask the nice promo execs at Cartoon Network how much fun it was to have the Department of Homeland Security start paying attention to their promos. They thought it would be clever to hire a third party marketing firm to place “suspicious looking devices” in public spaces to promote “Aqua Teen Hunger Force.” Yes, it was a brilliant promotion — very cost effective, lots of buzz, etc. But, considering the national threat level was Orange yesterday, I’m not sure it was very responsible.

Over the next few months I think we’re going to see quite a bit more of these, and other, new kinds of video crime. People have always found ways to pervert technological advances to serve their purposes — the tools that enable the “year of self-expression” should prove exceptional for the task.