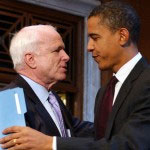 Back in 1960 the skills required to become President of the United States changed forever.  That was the year that John F. Kennedy debated Richard M. Nixon on national network television for the first time.  When reminiscing about Kennedy’s win, pundits love to cite that he was tanned, good looking, had great hair and had his make-up professionally applied, while Mr. Nixon appeared pale, had a nervous demeanor and sweaty brow.  They say that Nixon won on the radio but Kennedy won on TV.  1960 ushered in the era of the Network politician.  For better or for worse, after the 1960 debate, not only did every politician have to have video skills, they had to have expert ones.

Today, aside from video, Senators Obama and McCain are going to face off across several digital consumer touchpoints including: the web, short form video, the blogosphere, time-shifted television, social networks, SMS, ringtones, mobile applications, even wikis.  2008 will usher in the era of the Networked politician.  For better or for worse, not only will every politician need to have advanced media skills, they are going to need expert ones.

I know it’s early days for the national race, but – just for fun – let’s have a look at how the candidates are handling the transition from Network to Networked campaigning.

JohnMcCain.com is a very conservative website (pardon the pun). It feels old and clunky. To find some online video you must click “News & Media,” then click “Multimedia” and when you finally get to the page, you find the blip.tv player a page full of single line descriptions and links to videos and branded links to YouTube and Veoh.  There is no “multimedia,” on the page – just short form video. The presentation is fairly disjointed.  Actually, it looks like video is simply bolted on to the site and there is no context of any kind.  There is nothing best practices about the implementation or the messaging.  Anyone who is “in the culture” would view this part of the site as a hodgepodge of disparate content and know it was not for them.  On the other hand, anyone not “in the culture” would immediately be put off by the complexity.  One wonders who this part of the website is for?

At BarackObama.com you are greeted by a best practices, embedded video of Senator Obama welcoming you to his site.  The link to his media area clearly defines Barack TV, which opens a well stocked Brightcove video player; a flickr-based photo page; a downloads page complete with everything a web-savvy digital native might want to download (including buddy icons) and a mobile page with Barack ringtones and SMS alerts subscription opportunities.

If this is the first Networked campaign, Senator McCain is looking like a digital tourist and Senator Obama is looking like a man who knows and respects the conventions of digital life in the 21st Century.
One might argue that Senator McCain’s base is not really the “online crowd.”  For example, John has 53,381 MySpace friends and 136,793 Facebook friends.  Barack has 386,341 MySpace friends and 894,666 people have friended him on Facebook. Barack twitters http://twitter.com/barackobama following: 37,151; followers: 36,101; updates: 129, John does not.

Senator Obama has video channels on a multitude of social networking sites like Facebook, MySpace, YouTube, flickr, digg, twitter, eventful, linked in, blackplanet, faithbase, eons, glee, mi genti, asian ave, dnc partybuilder and mybatanga. In fact, Barack even has his own social network site http://my.barackobama.com/.  Senator McCain … not so much.

Senator McCain’s presence on YouTube is mostly spoofs and negative user videos about him. His biggest YouTube moment was when a supporter was filmed asking “How do we beat the bitch?”  On the other side, Obama has an insane online video following with offerings like Obama Girl and will.i.am’s “Yes We Can” video with over 8 million views.

Not to put too fine a point on it, Obama raised more than $200 million from more than 1.3 million people (most of it online), announced his candidacy via a web video (so did Senator Clinton) and his campaign used wiki’s to organize campaign managers.

I think it’s fair to say that Senator Obama is the clear leader in the transition from Network to Networked candidacy. The big question is: “Will it matter?”

Like I said, it’s early days in the first broadband presidential race.  Will the reach of network television still be the deciding factor or, will advanced media’s ability to cater to a fragmented base of single-issue voters and niche constituencies win the day?  My guess is that it will be a sophisticated combination of both.  The winner of this particular election will have demonstrated (one way or the other) the value of their particular brand of message management.  However it unfolds, from a media perspective, it is sure to be the most interesting campaign in history.