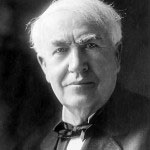 Tweet Article Share Article on Facebook Email Article Share Article on LinkedIn
A few years ago, I had the pleasure of hearing Jack Stanley, director of the Thomas Edison Menlo Park Museum, speak about the life and times of the inventor. From 1876 to about 1884, Edison got about 400 patents, a rate of almost one a week. Stanley called Edison, the New Jersey town, “the center of the productivity of Thomas Edison. It is also known as “the birthplace of recorded sound” because Edison invented the phonograph there.

Stanley’s fantastic speech was filled with wonderful stories and anecdotes most of us had never heard before. Afterwards, he showed me an origina l Edison phonograph, and–ever the storyteller–told a story that truly amazed me.

It seems that Edison liked to demonstrate his phonograph by allowing people to speak into the machine and then playing the recording back for them. However, the technology was outside almost everyone’s conceptual understanding. Up to that point in history, the only thing that could mimic the sound of one’s voice was a ventriloquist, so people thought it had to be a trick. Clergymen came to pronounce it “the devil’s work” and to discredit Edison.

People simply did not understand the concept of a recording.

In less than five years, we are going to see a proliferation of broadband clouds around the world. Some of them will make remarkable amounts of bandwidth available to ordinary people, who will use it for extraordinary purposes. Will the world seem like a magical place? Will the new technology feel, to some, like “the devil’s work”? Will ordinary people understand being “always on,” or will they try to “fool the machine.”

You might smile at the naiveté of socialites in the late 19th century–but, considering the bifurcated nature of our own early 21st century society, we may be in for a surprise.