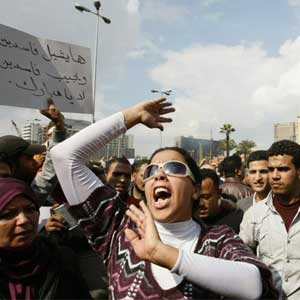 The events in Egypt over the past few days made me think about an article I was compelled to write back in late June 2006. It pondered the question, “Can any traditionally organized government withstand the ideological forces of a technologically empowered proletariat?” Call them blogmobs, txtmobs, tweetmobs or simply publishers, everyone in Egypt has a voice – and no matter how the government tries to silence them, in the Information Age, information will find a way. Here’s what I’ve been thinking about:

Throughout history, the Estates of the Realm have come under various attacks. In the past, the asymmetry of wealth usually struck the decisive winning blow for the first or second estate, and all was set right with the world. Truth be told, the fourth estate (the press) has been under the complete control of the first (clergy) and second (nobility) estates throughout most of history, so the control of information and the control of knowledge was pretty well guarded and defensible.

It is our freedom from that control (freedom of religion, freedom of the press, etc.) that makes America such a grand political experiment. To exercise and express our freedoms, we have been using technology, which heretofore almost exclusively emanated from a central point. Be it a leader or an associated bureaucracy, there was almost always a yellow brick road leading to a physical edifice. This is no longer the case. Information is the true currency of our age and it has transcended its bounds.

Far from being in the control of the realm, information now displays many of the characteristics we attribute to living things. It is born, it evolves, it eats, it excretes, it mutates–but, interestingly, it can no longer die. This was true on a small scale even before the “great unwashed” learned to blog. However, this is the first time in history that an idea (good or bad, true or false) can travel worldwide instantaneously and live on with a permanent, un-erasable, record of itself. Burn all the books you like, the knowledge lives on in the ether.

One of the underlying principles of a democracy is that the majority rules, but the rights of the minority are always protected by assuring them the right to speak and to vote. This principle is closely tied to another convention of democracy that requires all citizens to abide by the majority rule even if they did not vote with the majority. We have the right to disagree with our leadership, and our laws give us a way to show them our displeasure with their performance–we can vote them out of office.

Through wars, depression, recession, boom and bust, America has survived and ultimately thrived these past 230 years. But, it has never had to deal with a decentralized, self-organizing, cogent, antagonistic Fifth Estate until now. BlogMobs form like regular mobs. They can be constructive or destructive, patriots or rebels–but unlike their flesh-and-blood counterparts, their ideas can have immense, virtually instantaneous impact on a worldwide platform.

The most interesting attribute of BlogMobs is the way they self-assemble. These swarms of ideas evolve into points-of-view and then metamorphose and mutate into the next phase of their existence–gaining or losing the power to influence their audience. It is a fascinating twist on our ability to communicate and, for organizations that rely on central control (like governments and corporations), it is not necessarily a good thing.

Is The New York Times guilty of treason, or are its editors exercising their right of free speech and championing the proletariat’s right to know? (Author’s note: Back in June 2006, a story in the New York Times revealed details of a secret government program to monitor the financial transactions of many thousands of American citizens. It led to calls for the paper to be prosecuted for treason. Rep. Peter King (R-NY), who chairs the House of Representatives’ homeland security committee, asked the attorney general to prosecute “the reporters and the editors and the publisher” of the Times.)

The blogosphere is replete with compelling arguments for and against. No gatekeepers, no pundits, no leadership, just passionate points of view. Perhaps the legacy of RSS (Really Simple Syndication–the specification which enables blogging) will be the empowerment of a true Fifth Estate with a collective mind of its own and the ability to amplify the voice of the people above all others. Which begs the question: “Can any traditionally organized government withstand an ideological force of this magnitude?”