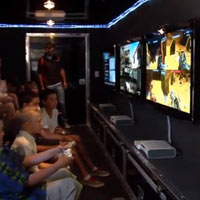 I am walking along one of two creeks that cut through the city of Austin, Texas. The grackle birds are cawing loudly, proudly singing. It is early morning, and some of the homeless people who live along the trail are sleeping or just rising. In the water, which has risen from a heavy rain, is a paperback book. I bend over to fish it out of the six inches of muddy creek water. It is a copy of The Purpose Driven Life, the self help book by evangelist Rick Warren.

Seeing the book makes me think about Warren Spector, the lauded game maker whose new offering I am in Austin to see. Spector is an evangelist for Mickey Mouse, particularly his Epic Mickey videogame franchise. It’s well known among gamers that this obsessive Disney fan has a separate house devoted to Disney memorabilia of all stripes. He loves Disney so much that Spector took a group of game journalists on a tour of Disneyland a couple of years ago. (I did not attend, but I hear it was both engaging and inspiring.)

There was much hope for the first Epic Mickey game, which appeared on the Wii console in 2010. Spector’s team had gone the extra mile with research and his enthusiasm for all things Disney, Mickey and Oswald was evident during interviews. He just seemed so happy to be making the game. That, too, was inspiring. Passion about just about any kind of art form is infectious. You can see it in people’s eyes; they seem uber-alive when they speak.

When Epic Mickey was released, however, the wound it had was a severe one: the so-called camera, the way you see the world Spector and his team led you to, was off – badly, so much so you’d get stuck behind something. Or you’d get downright dizzy.

It was not a failure for Spector. But it was indeed a setback, a mark on the career of a beloved game maker. Could Spector come back from some very negative press?

Flash forward to March, 2012. In Austin at an event at the Bob Bullock Texas State History Museum in the Spirit Theater, the lights went down in an auditorium that is most often used to display a multimedia history documentary. During a trailer for Epic Mickey 2: The Power of 2, which includes a playable Oswald The Rabbit, the seats actually shook during an onscreen earthquake. The gathered members of the gaming media saw a rare cartoon from 1928 featuring Oswald as a hobo on a train, one that featured a darker, daring Disney who was less concerned with morality and more concerned with hilarity at any cost. It was said that only a dozen people had seen the newly unearthed animation. As more of the game was unveiled, Spector made it clear that 700 people worked on Epic Mickey 2, and the first issue they dealt with was fixing the camera. In fact, he said there were 1,000 improvements to the camera.

When I played the Wii game, it was evident that the game makers were still perfecting the camera. There were still issues, but the game played better than its predecessor. When I played the PlayStation 3 version, there was far less of a challenge with the camera. However, the game crashed toward the end of my 15 minutes of play. (This happens a fair amount of the time when an unfinished game is demoed.) Epic Mickey 2 won’t be released until the Thanksgiving holiday period, so there is nearly seven months for the developers to make the way you play the game closer to perfection.

What really resonated was the addition of songs to the unplayable scenes in the game. In Epic Mickey 2, there’s no rhythm game to play in these song-rife scenes. But the whole game certainly will be enhanced by these musical numbers.

Spector called Epic Mickey 2 the first videogame musical. Certainly there have been songs in games before this. You can even consider Parappa The Rapper a kind of musical, for instance. What Spector probably meant is that there may never have been original songs of this quality in a musical game, songs that really move the story along, songs that cause earworms by sheer virtue of catchy melodies, songs that warm the heart, songs that are as memorable as those included in a great Disney film.

Harold Goldberg is a journalist and author who is the founder of the New York Videogame Critics Circle. His latest book is All Your Base Are Belong to Us, How Fifty Years of Videogames Conquered Pop Culture.

PreviousAlways On: Proof Consumers Are Enslaved and the Consequences for Brands NextEggdrop App Puts a Neighborhood Yard Sale in Your Smartphone