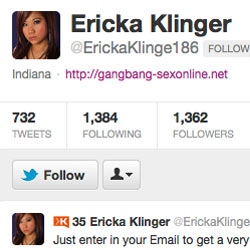 Elfrieda Utley @lerahxg followed me today. She’s from Arkansas. If you don’t look at her Twitter profile too carefully, it looks pretty normal. She has 128 followers, she’s following 1,407 people and she has Tweeted 43 times. Her last Tweet: “I can remove 90% of your so-called beauty with a Kleenex” is stupid, but – sadly, that’s not a crime on Twitter. That said, if you do look carefully at her Twitter profile, there is a problem – and it’s pretty significant: @lerahxg is a pornbot.

By the time you read this, the account will probably be suspended – but maybe not. There’s a slight chance that Twitter won’t find anything wrong with it (other than the pornographic content of the website).

Elfrieda represents so many problems with Twitter I don’t quite know where to start.

This week I’ve probably identified 50 new followers as pornbots. Twitter gives you two options for dealing with this kind of annoyance. You can “Block @name” or “Report @name for spam.” If you report the offending follower as spam, the follower is automatically blocked and removed from your followers.

The sad news is that you really have to look at every single person who follows you and determine if they are a real person or a bot.

Of course, all bots are not pornbots. There are plenty of other types of Twam (Twitter Spam). There are “link twammers” who use your @name to get your followers to click on their link. These really make me mad because they are trading on my brand name.

If you use Twitter for business it is essential that you remove each offending twammer from your followers as soon as you identify them. Why? Twitter is both a medium and a metric. You use Twitter to communicate, but you also use Twitter to measure the efficacy of your social media. A bogus follower count (especially one that is inflated by pornbots) does not accurately represent the value of your social media communication. And, should a quantitative entity analyze your Twitter account, you will look very foolish to your boss. Pornbots can get you fired.

We analyzed the 25 Twitter profiles, each with over 20,000 followers, and found that all of them had pornbot followers. One account had over 15 percent bot followers, which is pretty sad.

If you project these numbers out to the greater Twitter community, it doesn’t take long to come to the conclusion that the number of followers someone has is not a meaningful number, unless it is adjusted for bots and twam.

Do yourself a favor. Grab a tool like tweepi and analyze your Twitter account. When you’re done, I’d love to hear from you. How pervasive is twam? LMK @shellypalmer.