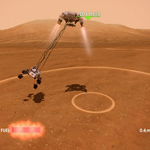 NASA has already made it clear that the Curiosity’s touchdown on Mars is a nerve-wracking experience, what with the seven minutes of radio silence, zero margin of error and all. To drive that point home, the organization partnered with Microsoft to offer Xbox Live players the experience of controlling the nerve-wracking descent. Starting Monday, you’ll be able to download the free Mars Rover Landing, NASA’s first Xbox Live game. The title uses the Kinect motion controller to simulate the many phases of landing, including dropping the heat shield and deploying the supersonic parachute, with players’ movements controlling the speed and direction of the craft as it approaches the Red Planet. Read the full story at Engadget.

PreviousOnline Marketplace ‘The Cools’ Is Etsy Meets Tumblr NextWhile trying to save over $1 billion, RIM forced to pay $150 million in patent suit damages