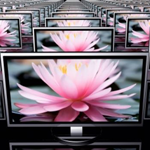 This isn’t the best year for television manufacturers, as total unit shipments are expected to ease some 1.4%, according to data presented by DisplaySearch. That decline is brought about by a slowing in the growth of sales of LCD televisions, which are expected to rise only 5% this year. That’s down around 28% from 2011’s 7% sales increase for televisions employing the screen technology. Read the full story at The Next Web.

PreviousGoogle Maps gets cultured, as indoor mapping arrives at more than 20 US museums NextT-shirts developed that could charge mobile phones