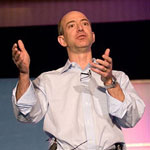 Nope, no Apple TV device from Jeff Bezos today. Instead the Amazon CEO spent most of his time going after one of Apple’s core products instead: His new line of Kindle Fires is aimed directly Apple’s iPad, even though he never mentioned the company or its tablet a single time. But beyond the specs and stats Bezos trotted out today, his most interesting compare-and-contrast exercise was rhetorical: Amazon, he spelled out, isn’t in the gadget business, but the retail business. In his words: “We want to make money when people use our devices, not when they buy our devices.” Read the full story at All Things D.

PreviousEverything you need to know about today’s Amazon Kindle event in LA NextHTML5: Will It Ever Live Up To The Hype?