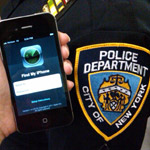 Apple’s stock might be taking a beating, but that doesn’t mean the products dreamed up by Jonathan Ive and company aren’t still hot commodities. On the contrary, Apple products are still so hot that thefts of iOS devices helped drive New York City’s crime rate up for the first time in 20 years, according to The Wall Street Journal. The news isn’t shocking considering the data the New York Police Department released in October, which revealed Apple-related crimes were up 40% this year. Paul Browne, the New York Police Department’s top spokesman told the WSJ, ”Overall crime in the five boroughs is up 3% so far this year, driven by the thefts of Apple products.” Browne said there would actually be a “slight decline in crime citywide” had thefts of Apple products remained the same.