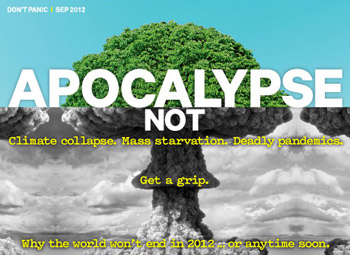 We have become addicted to catastrophes and end of days predictions. We have become, in a word from Gary Alexander: Apocaholics. In a 2007 web essay, Alexander began a long list on Armageddon- that-never-were with the following preamble:

Hi, I’m Gary and I’m a recovering Apocaholic. I am currently Apocalypse free for nearly 18 years. I left the church of the Religious Apocalypse in 1976, over 30 years ago, and I resigned from the secular church of the Financial Apocalypse in 1989. Yes, I still feel the urge to proclaim the end of all things, from time to time, but I white-knuckle my way to a history book for a little perspective, and then I breathe easier. If you wish to join AA, the only requirement is that you give up the adrenaline rush of media-fed fantasies.

Since I spoke to you last on this subject, in 1994, we have survived “Bankruptcy 1995” (the original epidemic of Hockey Stock charts), the Big Bang in Hong Kong, years of Y2K scare stories, a SARS epidemic, Mad Cow disease, Bird Flu, a real threat on 9/11, Triple Deficits (Budget, Trade and Balance of Payments), wars in Serbia/Kosovo, Iraq and Afghanistan, Deflation in 2003, Inflation since then, The Perfect Storms of 2005 (Katrina, Rita and Wilma, the 3 Witches of the Bermuda Triangle), and today’s reigning fears of Global Warming, $200 Oil and the Sub-prime Housing Loan Crisis Implosion.

But before we go from today’s Sub-prime to the ridiculous claims of imminent collapse, let me introduce the depths of my past addiction to the Apocalypse. I was born in July 1945, the day the first atomic bomb exploded in Alamogordo, New Mexico. That mushroom crowd has haunted our lives ever since. As a teenager, I became convinced the world would end before I was 30. Too soon old…too late smart, I was very, very wrong.

Taking a cue from Alexander, Matt Ridley, a columnist for The Wall Street Journal and author of The Rational Optimist, produced a well-researched and balanced look at apocaholism for WIRED magazine called “Apocalypse Not” (8/17/12).

Ridley’s piece highlights the adverse effects of being a world of apocaholics. We make bad personal and policy decisions. Level-headed, middle ground approaches to real issues like climate change are not considered, and the moderate “lukewarmers” are never given a voice.

Ridley ends his piece like this: “We will combat our ecological threats in the future by innovating to meet them as they rise, not through the mass fear stoked by worst-case scenarios.”

In a world of apocaholics, there is nothing but extremes. You have two choices: Tuesday or Doomsday. There’s no in-between. This can be dangerous. We’ve seen this played out recently with climate change. In the apocaholics’ view, the world is either going to end or everything is fine. (Apocaholics and most any –aholics are really good at denial). Climate scientists have suffered from this bipolar conundrum. For years we’ve been told that we’re either all going to die from climate change or we’re told that everything is fine. Of course, neither of these is correct.

The trouble with real problems is that they aren’t as clear as a massive planet on a collision course with the Earth, nor are they prophecies from an ancient civilization that give an actual day and time when everything goes to hell. The sober truth is that real problems are not as simple as Tuesday or Doomsday. I love a good end of the world story as much as the next person, but to solve the real problems facing us, our children and our planet we need to grow up.

“I take everyone’s extreme interest as a compliment,” Joe told me as we finished up our conversation. He’s extraordinarily level-headed that way. “The reason why people love apocalypses so much is that they love science and just don’t know it. It lets them get interested in the sun and science and the future and the wonderment of the natural world. Also, the end of the world makes us all the same. It doesn’t matter if you’re from a red state or a blue state… all the petty reasons we fight and argue don’t matter anymore. If they sun blows up and the world ends, it’s bad for all of us.”

Staring Down Both Barrels of the Earth’s Shotgun

I spent my apocalypse in Cannon Beach, Oregon. The evening of 12/21/12 found me standing on the back deck of the Surf Sand Resort, watching the raging Pacific Ocean in the moonlight. In December, the coast in the Pacific Northwest is cold and rainy and windy. The surf is violent and loud as it smashes into the sand and spreads debris across the beach. It was a perfect place to watch the world end.

Cannon Beach is located on the Northern coast of Oregon. It’s a small town with a picturesque downtown and some really great pubs. It also sits right next to the off shore Cascadia fault, where the Juan del Fuca Plate is sliding under the North American Plates. This plate tectonic action can bring about deep and severe earthquakes out in the Pacific, followed by powerful tsunamis. It’s not a matter of IF… it’s a matter of WHEN. And when it does happen, beautiful Cannon Beach is sitting in the cross-hairs of that destruction.

I watched the violent winter ocean that night, knowing that when a catastrophe strikes this part of the coast, the very deck I was standing on would be destroyed. I was staring down both barrels of one of the Earth’s many shotguns. But it cleared my head of all this apocalypse chatter. I wasn’t scared. (Cannon Beach and many towns on the Oregon coast have a well-planned evacuation route and safe high ground isn’t very far away.)

I looked up at the unseasonably clear sky and thought about Carl Sagan and the quote from his groundbreaking 1980 TV show Cosmos. I could hear him say, “We are all made of star stuff.” It was Sagan’s lovely idea that we are all made of the same things; the elements that make up our bodies come from the stars. We are made of the same stuff that space scientists like Joe Kunches have been watching and tracking with their incredibly powerful telescopes. We have a connection not only to this world but to the entire it cosmos.

In the face of that, all this apocalypse talk became trivial. When we think about our future, are we looking in the wrong places? How would our vision for the future change? Would we continue to fight and bicker about the same problems? If we are all made of stars, all standing on the edge of this lovely and violent planet together, couldn’t we imagine a very different future for ourselves?

It made the end of the world seem silly.

Previous2013 Buzzwords: What Are We Going to Get Sick of Hearing? NextShelly Palmer Radio Report - January 1, 2013