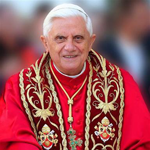 On December 12, 2012, Pope Benedict XVI tweeted. The spiritual leader of the Catholic religion sent out this message:

Dear friends, I am pleased to get in touch with you through Twitter. Thank you for your generous response. I bless all of you from my heart.

In the wake of the Pontiff’s 140-character message, it seemed fitting to look at the future of religion in our technological world.

Religion is a tricky thing. It is something that is uniquely human, and no matter if you are a follower of Judaism, Christianity, Islam or any other of the world’s faiths, I find it to be a fascinating window into who we are as people. Even if you don’t believe in a god at all, it’s telling about who we are as humans and it’s a fascinating lens through which to think about our technological future.

It seems so odd to hear, “The Pope tweeted.” It’s a phrase that would have sounded like Dadaist poetry if you’d heard someone say it a decade ago, and still improbable if you’d heard it when Twitter first launched in 2006. 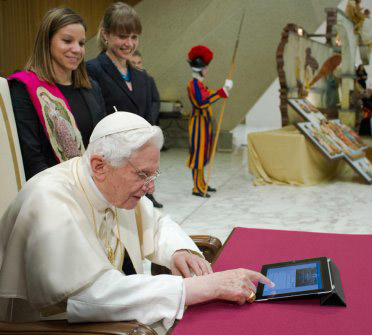 “It’s a sign of the times,” my friend Byrd said to me when I read him the numbers. But what is it a sign of? What is the future of religion?

Cell Phones that Point to Mecca

When commenting on the Pope’s tweet, it would have sounded less exotic if we’d said, “The Pope used technology to connect with his followers.” That’s not so strange. Religions have been using technology almost as long as there religion and technology have been around. Innovations and advance have been tightly linked to religious practices.

In the 1450s, German printer Johannes Guttenberg made 48 copies of the Bible using a radically new process that would change the future of the world. The Gutenberg Bible was the first book created in the West using the movable type technique, which kicked off a publishing revolution that would bring information and knowledge to people who had never had access to it before.

A colleague of mine, Dr. Genevieve Bell (@feraldata), has spent years exploring the intersection of people, technology and religion. Genevieve is a cultural anthropologist and uses her research to understand people so that she can develop better technologies to make their lives better. She is a social scientist at a technology company and sees religious practices as a powerful and important part of who we are, and is fascinated about how we express this through technology. One of the interesting things she told me was how cell phones not only remind Islamic worshipers when it is time to pray, but also use its GPS system to point the person towards Mecca during prayer.

Rachel, a friend of mine who lives in Los Angeles, watched her Yom Kippur services this year live streaming from the Central Synagogue at Lexington and 55th street in New York City because she prefers the Cantor Angela Warnick Buchdahl. (Buchdahl is the first Asian-American ordained as a rabbi and cantor.)

“You can also follow them on Twitter,” Rachel told me with pride. “They’ve been doing these things for years. I remember years ago you could call in for services if you couldn’t make it in person. They’re great. They’ve always embraced technology.”

Religious use of technology is nothing new. It expresses who we are as humans though our technology. The thing that feels strange about the Pope’s tweet is the apparent frivolity of it. Is a tweet important? In a world where @justinbieber has thirty-two times more followers than @Pontifex (granted it’s only been 24 hours since the Pontiff’s first tweet), it can feel like the communication has been cheapened. Is a tweet as important as an email or a written note? If the Pope tweets a prayer, is it any less holy?

Like Byrd said, “It’s just a sign of the times.” Just as Twitter became a credible and incredibly human way to track the devastating impact of the Hurricane Sandy Catastrophe, so too has the social media arena become platform for our faith. What’s the future of religion?

The future of the religion looks pretty good. It’s been around for quite a long time, and I think we can bet on the fact that it’s going to be around for a good bit longer. Religion is just one expression of our humanity.

The mingling of technology and religion will only continue. That means having the Pope in your Twitter stream is, in reality, having the actual Pope that much closer to you as an individual. If you’re Catholic, that’s pretty awesome.