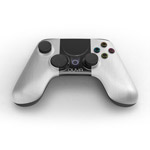 The team behind the OUYA Android game console clearly paid a lot of attention to its looks — they nabbed Yves Behar to design the thing, after all — but not every component has passed muster with the masses. Thankfully, after hearing some discontent from early backers and developers, OUYA has taken some crucial feedback about the console’s controller seriously and has decided to make some changes. According to recent post on the official OUYA blog, the console’s controller will no longer sport those flat, disc-like d-pads — they’ve been replaced by a more standard cross-shaped affair that should look familiar to anyone to who’s done so much as glance a console controller in the last 20 years. The controller’s dual analog sticks have undergone a bit of a makeover too, as they now feature a grippier finish for increased precision.