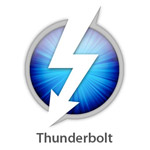 We’re not far off from the introduction of Intel’s next-generation Haswell processors, but this isn’t the only new technology that Intel has in the hopper. In a presentation at this year’s National Association of Broadcasters (NAB) Show, the company also took some time to detail upcoming enhancements to its high-speed Thunderbolt interface. Engadget reports that the next-generation version of the interface, called “Falcon Ridge,” is due out in 2014, and it will double the speed of current Thunderbolt controllers—we’d heard rumors about this controller before, but this is our first official confirmation from Intel. The second-generation “Cactus Ridge” controllers were capable of 10Gbps transfer speeds, but Falcon Ridge increases this to 20Gbps.