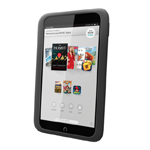 Barnes & Noble’s refusal to open its ecosystem has long been one of our primary complaints about the company’s tablet offerings. The Nook HD and HD+ are extremely nice pieces of hardware that have been held back by their own walled software offerings — having a fast device with a nice screen only gets you so far without the proper apps. The company line up to now has been that walling off content allows for a sort of quality control, assuring that apps are developed specifically for the unique form factor of its devices. And while there’s perhaps something to be said for that sentiment in the sometimes-fragmented world of Android devices, it was hard to ignore the fact that offering up exclusive access to content through your own marketplace assures better cash flow. It also, unfortunately, means that without extensive developer outreach, there are sure to be plenty of popular apps that just never make it over to your side of the fence.