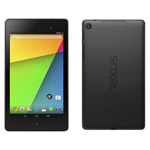 Google and Asus ran into some quality control issues with the original Nexus 7, and early reports indicate the second-generation model is having its own share of problems. Unfortunately, it seems those hardware troubles don’t end with malfunctioning GPS. Complaints about the brand new $229 tablet also extend to the display. Few owners have bad things to say about the Nexus 7’s impressive, tack sharp 1920 x 1200 resolution. But touchscreen sensitivity is another matter. Like with the GPS bug, many users have taken to XDA Developers and Google’s product forums to call out questionable behavior they’ve seen from the device. Reports seem to focus on “phantom” presses — finger taps that are being registered by the Nexus 7 even when a user’s hand is away from the screen.