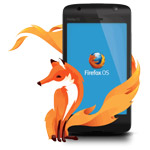 Mozilla’s HTML5-based open mobile platform Firefox OS, which bagged support from a raft of carriers at the start of this year as a low cost alternative to Android-based smartphones, is gearing up to launch in more markets. New device hardware running FFOS is also incoming, Mozilla said Wednesday in a blog – although it’s not naming the forthcoming markets and devices at this point, noting only that new phones will run the latest version of the OS, FFOS (1.1), also announced on Wednesday. “Individual partners will announce specifics about upcoming launches in each market,” it added. New features in the v1.1 update to FFOS include: performance improvements, such as better app load times and smoother scrolling; support for new languages (now more than 15 languages); support for MMS; a push notifications API; and more.

PreviousApple iPhone 5s and 5c Launching in 37 More Countries By November 1 NextSamsung Unveils the Galaxy Round: The First Smartphone With a Curved Display