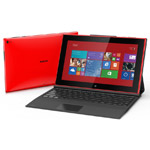 The much-anticipated Nokia World came and went and, well, we’re left with a lot to chew over in the wake of the Finnish mobile giant’s announcements. So by way of a quick recap, here’s everything that was revealed at the Abu Dhabi event. Hold on to your hat… This was the juicy news everyone was waiting for. Nokia unveiled the 10.1″ Lumia 2520, a $499 Windows RT 8.1 tablet with LTE. It’s expected to start shipping this coming fall, with the initial roll out kicking off in the US, the UK, and Finland, with additional countries to follow “shortly after.” Everything announced at Nokia World 2013 in one handy listMuch like the Microsoft Surface, the Lumia 2520 pairs with a $150 Nokia Power Keyboard, a wraparound cover that includes a fully functional keypad. Unlike the Surface, however, the attachment features a gesture trackpad and also provides five hours of extra battery life and two built-in USB ports.