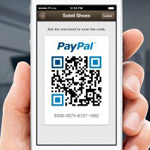 Another day, another announcement of a product aimed at getting shoppers to buy stuff in retail stores using an app on their phone instead of a physical credit card or cash. This one — from PayPal, called Payment Code — lets users pay through their PayPal app or a retailer’s app integrated with PayPal in a few steps. First, they need to check in on the app. Then, if the shopper is in a store that has bar-code-scanning devices, the app will automatically load a QR code for the cashier to scan to complete the transaction. For participating stores that don’t possess those scanners, the app will display a random four-number code for the shopper to punch into the store’s payment keypad to finalize the sale. Sound easier than paying with a credit card or cash? No. And PayPal says it recognizes this. So it will give shoppers other incentives to pay with the app.