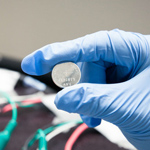 The problem with lithium ion batteries is that the more discharge cycles you put them through, the less efficient the negative electrode becomes at holding electrons. This just won’t do in our mobile future, so researchers at Stanford University have developed a battery that actually heals itself. It’s nearly alive. Researchers have been working to increase the energy density of modern lithium ion batteries while reducing their weight for a number of years now, with mixed results. One of the most promising advances has come from incorporating silicon into the cathode, which allows it to hold far more electrons than the current oxide mix. However physically silicon swells, up to 300 percent, when filled with electrons and shrink back down as they’re expended. This leads the material to crack and splinter within a few discharge cycles.

PreviousFBI: Anonymous Has Hacked US Government Sites for a Year NextYahoo to Encrypt All User Data by 2014 to Keep NSA Out