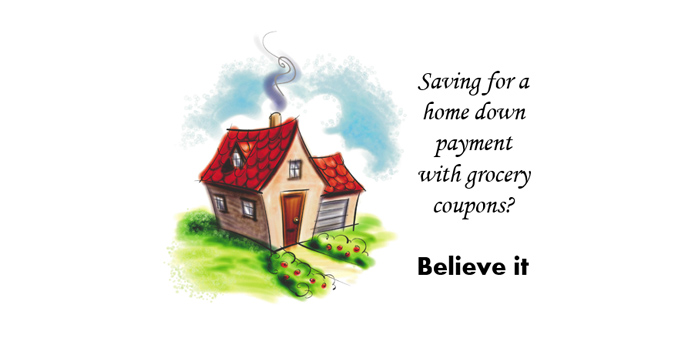 Every week, Amanda Munster marches into the grocery store on a mission: save enough money to buy a house.

The 26-year-old digital marketer lives in Dallas with her fiance’ and, like many twentysomethings, is tired of throwing away paychecks on rent instead of building equity with a mortgage.

Munster’s biggest roadblock to home ownership is the dreaded down payment. That’s where grocery shopping comes in.

Each Sunday, Munster buys her local newspaper (yes, the print version) and opens to the coupon section. She matches the newspaper’s deals with sale-price items on Couponmom.com, which often doubles or triples her savings. The process takes two hours and so far has worked like a charm.

Munster says she saves between $200-300 a month on food and, since she started couponing 18 months ago, has amassed about $4,500. Combined with other funds, she thinks she’ll reach her goal of $10,000 for a down payment in the next six months.

“I am not an extreme couponer by any means,” Munster told me. “We had to cut back on something, and groceries were really the only thing we could.” No Mama June here; just a Millennial focused on her finances.

Forget about the American Dream. The news media likes to portray home ownership for Millennials as a pipe dream. In May, the Consumer Financial Protection Bureau reported the tidal wave of student loan debt, along with a turbulent job market, have washed out Gen Y efforts to buy homes.

Cue the media frenzy: Millennials are screwed! We’ll live with mom and dad — and follow these parental ground rules — forever.

Yet young people like Munster have stemmed the tide and found creative ways to obtain enough money for a down payment. That trend matches with findings at Navy Federal Credit Union (NFCU), the largest credit union in the country with 4.5 million members. The credit union found over 50% of NFCU’s Millennial members are saving to make a home purchase.

“The housing market is slowly improving and consumers are becoming more confident in the economy and their finances,” said Alan MacEachin, corporate economist at Navy Federal.

NFCU has special programs for first-time homebuyers and also works with young adults to help us qualify for a loan.

Read the full Experian report and also see the average credit score where you live.

With less-than-stellar credit, there’s little room for error in the pursuit of a house. Day after day, it takes steady savings, cautious spending and an eye on the prize. Being responsible with our dollars: one of many milestones we reach on the way to age 30.

Brad Hines understands what it takes. The 29-year-old writer and founder of HungryKids.org, which raises money for world hunger relief, explained to me his series of cost-cutting measures to save for a home down payment.

Justin Rivero, a Forbes contributor, asked in a recent column “Are Millennials Destined to be a Generation of Renters?”  Well, Amanda Munster — as she clips out coupons on bread and cheese and pockets the cash — would roundly disagree. She has spent a year-and-a-half diligently shaving dollars from her monthly expenses.

Munster is the first to tell you there are no shortcuts to a down payment. If you want that first home badly enough — and dream of the day you stop paying rent — ingenuity and determination will bring you to the promised land (AKA the closing table).

“I think our generation was used to having stuff given to us, but then things changed dramatically in the real world,” said Munster. “We’ve had to really hustle and find ways to do what we want to do. We can reach our dreams, but we have to go about it a different way.”

Do you want to buy a house? How are YOU saving for the down payment? Share below!