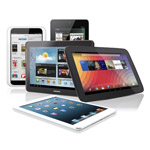 While Apple shipped 26 million iPads in its latest quarter and Samsung shipped 14.5 million tablets, both up from last year, IDC is warning that the overall tablet market in the US appears to be reaching saturation. “It’s becoming increasingly clear that markets such as the US are reaching high levels of consumer saturation and while emerging markets continue to show strong growth this has not been enough to sustain the dramatic worldwide growth rates of years past,” warns IDC’s Tom Mainelli. Worldwide tablet shipments grew to 76.9 million during the all-important holiday season quarter according to IDC, 28.2 percent more than the same period last year. However, the growth appears to be slowing. Apple shipped 74.2 million iPads during 2013 compared to 65.7 million iPads during 2012, just a 12 percent increase.