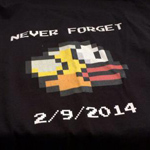 The Flappy Bird phenomenon shows no signs of slowing down, despite the fact that the original title was yanked out of the App Store by creator Dong Nguyen, whose newfound fame apparently became too overwhelming. But though “Flappy Bird” itself may be gone, the App Store’s top charts today are filled with clones that mimic the addicting, frustrating game that became this year’s viral hit. However, that may not be the case for long. Word has it that both Apple and Google are now rejecting games that have the word “flappy” in their title. According to Vancouver-based game designer Ken Carpenter of Mind Juice Media, Apple rejected an app of his called “Flappy Dragon” from the App Store. Apple told him “we found your app name attempts to leverage a popular app,” says Carpenter. The issue is that this is going on in the background, fairly secretly, and that the list of domains is necessarily attached to your SteamID; it’s identifiable.

PreviousSteam and Valve May Be Tracking Every Website You Go To NextReport: Apple May Want to Buy Tesla, is Exploring the Medical Field