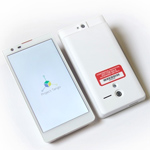 TechCrunch broke the news on Thursday that Google was producing a prototype 3D sensing smartphone called Project Tango. They also broke down the capabilities of the vision processor inside the device and talked about what it means for the future of phones. Now, we’ve got an exclusive look in the video below at a real 3D indoor map of a room captured with one of the prototype devices by Matterport. Matterport, which makes computer vision and perceptual computing solutions like software that maps and creates 3D reconstructions of indoor spaces, was one of the few partners Google chose to give an early prototype of the device to. We spoke to Matterport CEO Bill Brown about the ability of Project Tango to recreate 3D scenes. Brown says that the project has accelerated the mobile 3D capture space significantly. Mobile devices have become viable capture platforms for 3D mapping far faster than most people following the tech expected it to happen.

Read the full story at TechCrunch, and watch the video below.