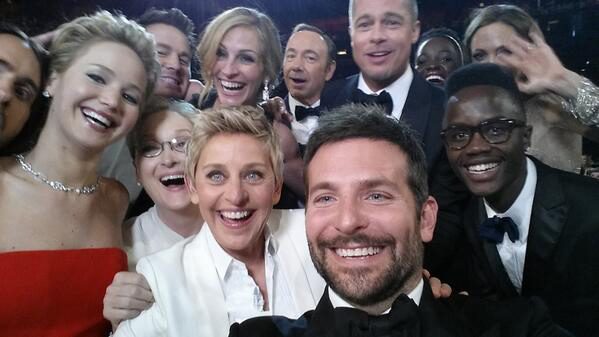 Remember that picture above? Samsung was the sponsor behind Ellen DeGeneres’s headline-grabbing, record-breaking, Twitter-busting “selfie” at the Oscars. For Samsung, it was part of a much larger, longer-term march to become one of the most talked about brands in America.

For quite a number of years running, Coke was the most talked about brand in America. Beginning in 2010, Apple started a sharp ascendancy and by Q4 of 2012, it had overtaken Coke. Samsung’s WOM is rising rapidly, as well, breaking into the top 10 in 2012 and into the top 5 in 2013. 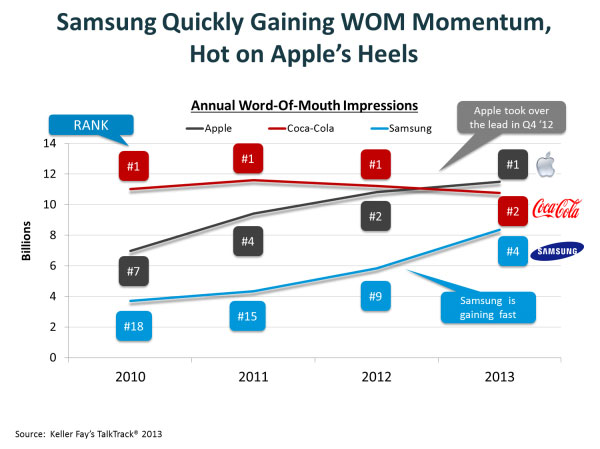 Samsung’s WOM not only grew sharply during the past two years, but especially during the all-important holiday shopping season. Samsung’s WOM increased by 150 million word of mouth impressions during the 2013 holidays versus 2012, while Apple’s dropped by 359 million (more than any other brand).

No other brand has seen such a sharp rise in WOM as Samsung. How have they done it and what does the future hold?

In terms of the quality of those conversations, both Samsung and Apple enjoy very favorable word of mouth. However, Samsung’s sentiment improved significantly year-over-year (2013 vs. 2012), while Apple’s net sentiment score declined. As a result, Samsung now enjoys a more favorable ratio of positive to negative WOM than Apple. With evidence that positive WOM drives sales, this bodes well for Samsung. 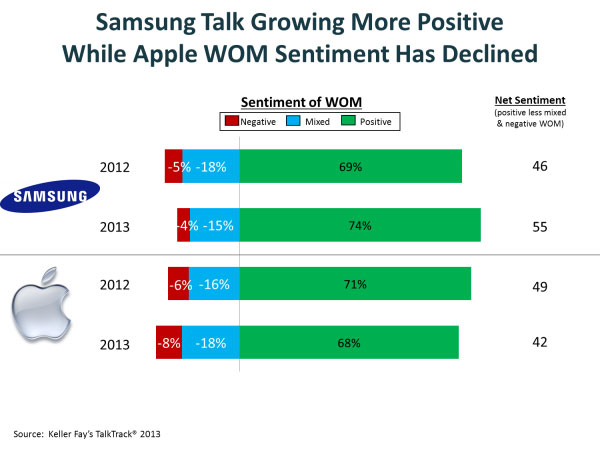 Samsung also has proven adept at creating WOM based on people’s positive experiences. This is the heart and soul of word of mouth: when people’s experiences are so motivating that they want to tell others, it creates conversations that are more persuasive and more likely to lead to sales.Whereas the average across all product categories is that 20% of conversations are sparked as a result of people’s experiences with a product, for Samsung it is 32% — two thirds higher than the norm – while Apple close behind at 29%.

Samsung’s selfie at the Oscars brought together a wide variety of stars—Ellen DeGeneres, Brad Pitt, Julia Roberts, Marilyn Streep, Bradley Cooper and more – all of whom were genuinely enthusiastic about being part of the picture. Similarly, Samsung’s marketing strategy is leveraging a huge variety of tools from the major marketing groups of paid, earned, and owned media. Samsung’s success shows how powerful all those tools can be when used in an integrated and creative way.

PreviousBlackBerry to End Licensing Agreement With T-Mobile NextReport: Google is Testing Out a Bunch of New Features for Gmail (Android)