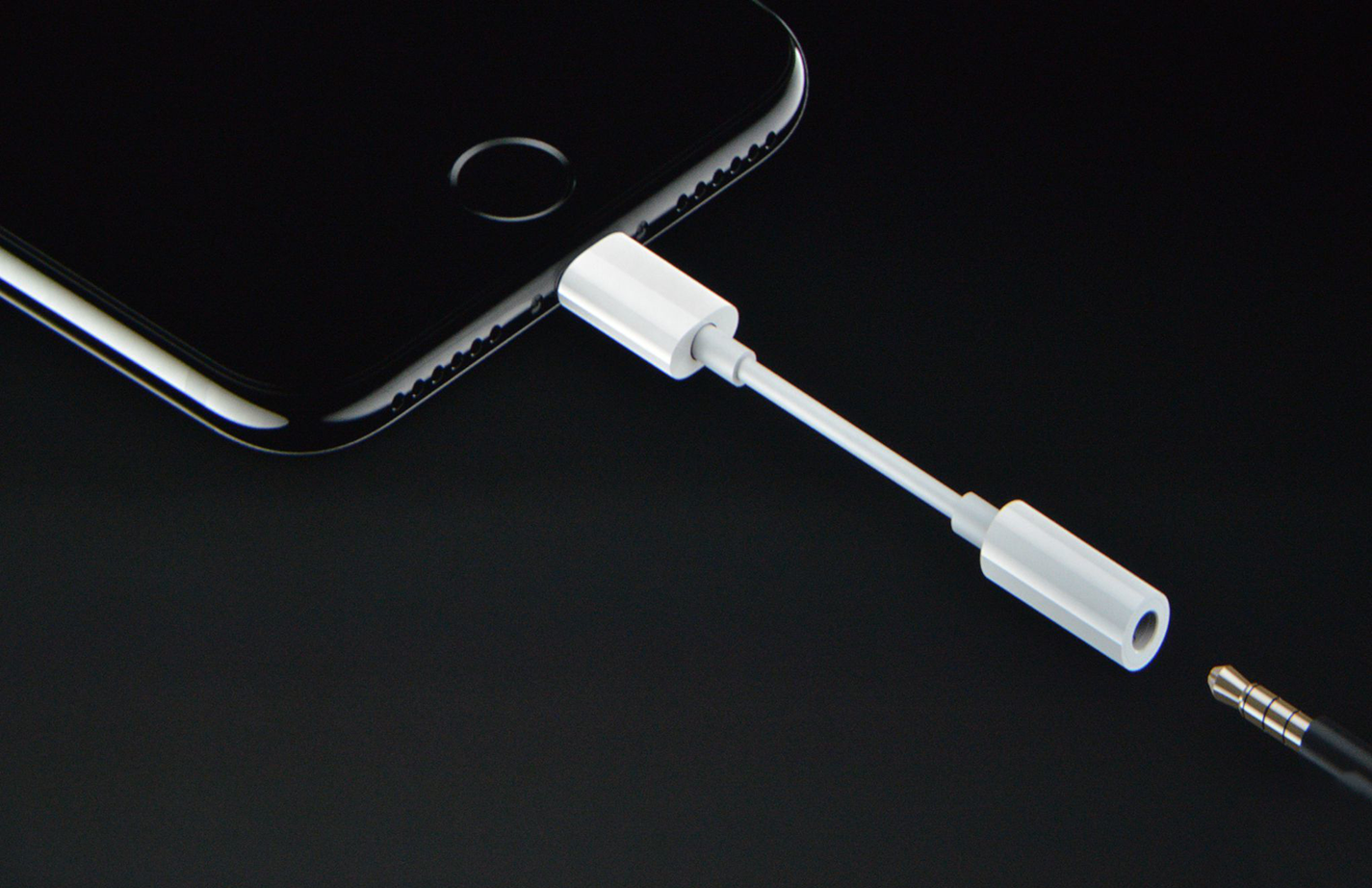 Calm down, fanpeople – I’m going to make my case.

It would have been fine to replace the 3.5 mm jack with an additional lightning port. If the iPhone 7 had two lightning ports, you would be able to do all of the following:

The iPhone 7 Has Only One Lightning Port!

Which means that to do any of the above, you will need a huge dongle like the Belkin Lightning Audio + Charge RockStar.™ It’s not the $40 price tag that bothers me, it’s that I need to carry it in my pocket at all times. 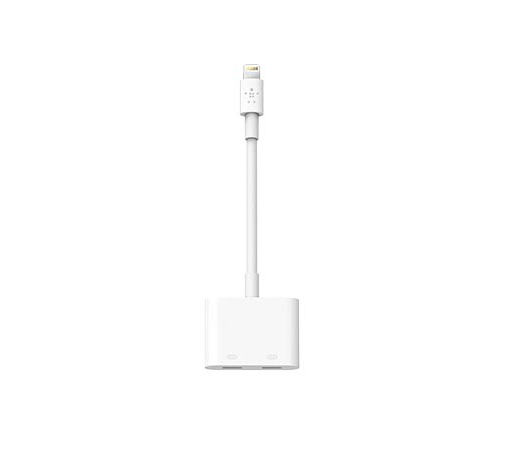 Or if you reject the idea of using headphones with a lightning plug, you will need an adapter cable (included with your iPhone 7).

Or you can purchase a different dongle with one 3.5 mm jack and one lightning jack.

You Will Also Need Two Pairs of Headphones

No device you own is compatible with lightning plugs. So if you want to use your new lightning connector headphones to video chat (Skype, Facebook Messenger Video, Google Hangouts, etc.) on your laptop, you’ll need a “female-lightning to male 3.5 mm adapter” (which currently does not exist) or you’ll have to use your old headphones. In fact, if you want to listen to anything on any device other than an iPhone 7 (including your MacBook, MacBook Air, MacBook Pro, all iPads, iPods, etc.), you will need an adapter that does not yet exist or your old headphones or earbuds.

Why Defend an Ancient Technology?

Shelly, You’re on the Wrong Side of History – The Future Is Digital!

Yep. It sure is. And the lightning connector offers 24-bit, 48 kHz lossless output, which you need like a hole in your head with the 29-cent transducers on the business end of consumer-grade earbuds! If you compress your music files by checking the “convert higher bit rate songs to 128 kbps AAC,” you cannot – not won’t, cannot – hear the difference between analog or digital earbuds. The audio resolution simply isn’t there. If you’re walking outside or in any environment where there is a noise floor of any level above perceived quiet, the difference between analog and digital open-air (as opposed to sealed-ear) earbuds or headphones is imperceptible.

Digital is not the future; it has been around for decades. And those of us who record for a living have been using super high-end digital-to-analog converters (you can’t listen to a digital signal; it must be converted to analog for you to hear it) for years. That’s not what is happening here, so don’t start with me about “digital.” Unless you pioneered digital audio, work in the business, or have an EE in physics, you don’t know enough about it.

The Future Is Wireless

OK, let’s talk about wireless. The iPhone 7 is not wireless; it now has more wires than any other device I would even consider putting in my pocket. If it were wireless, it would be Qi, PMA/AirFuel or A4WP Rezence inductive charger (“wireless” charging pad) compatible. It is not. Add the power cables to the audio cables to the dongles and adapters, and you are in a sea of cables – the iPhone 7 is as far from wireless as you can get! 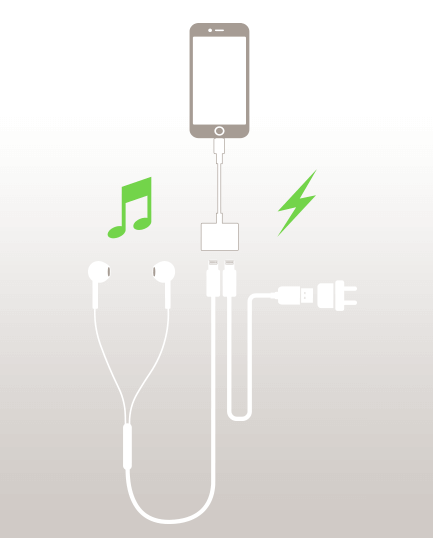 What about the New, Cool W1 Chip?

I love it. The W1 chip will make it easier to connect Bluetooth devices together and has many advantages over the current implementation of Bluetooth.

Your current Bluetooth-compatible wireless headphones will work with the iPhone 7. The battery issue will be the same non-starter it has been since you purchased them. Now instead of walking through the airport or train station waiting area muttering “Charge, charge” hoping a Good Samaritan will take pity on you and offer their spare wall brick and lightning cable, you will resort to violence because you will need to charge your iPhone AND your wireless headphones. “Officer, see that the crazy person over there? The one rocking back and forth in the corner who just keeps repeating, ‘I need power, p-o-w-e-r.’ That’s the person who hit me in the head with a huge dongle and stole my charger.”

Wireless headphones are awesome for runners or people who work out. They’re great for short-term uses. If you have the discipline to charge them every day and don’t use them too much, they might be a solution for you. For everyone else in the world, throwing a pair of wireless headphones in your backpack or purse is a useless gesture. They do not hold their charge indefinitely.

The downsides of wireless headphones are well understood by everyone who has ever owned a pair. Even Apple’s new AirPods, which are optimized for long(er) battery life, need to be charged every day. (BTW, and I’m being super serious now, do AirPods present a choking hazard for children? They look pretty small.)

It’s the Thinnest, Most Beautiful iPhone Ever

You will love the fit and finish of an iPhone 7 for the first three minutes you own it. Then, you are going to put it in a case so neither the color of the iPhone nor its relative thinness will matter at all. Any case that can protect the device will make it way thicker, and even Apple’s own preggers-looking iPhone 6s Smart Battery Case completely covers everything but the front of the phone.

Shelly, You’re Too Stupid to Own a Smartphone!

So here’s the thing. The “future is wireless.” We are quickly heading toward a world dominated by wireless networked devices. Soon your Apple Watch, some kind of VR, AR or Mixed Reality glasses, and some kind of implant will get us closer to Ray Kurzweil’s Singularity. How soon? Three years? Four years? By 2040? (That’s the median between Vernor Vinge’s and Ray Kurzweil’s revised estimated dates for the Singularity.)

We’re going there; there’s no question in my mind. That said, there’s no rational explanation for making the iPhone 7 incompatible with every other consumer electronics device on the planet (including every Apple computer ever made).

If the near-term future is wireless, why change the jack now? Demonstrate to the world that 3.5 mm jacks are valueless, and it will be obvious when to remove them. Floppy disks died by themselves, as did CDs and DVDs, because there were better, easier, simpler options that everyone was naturally gravitating toward. No one, and I mean no one, has ever gone to bed at night and, in that special moment between being awake and asleep, had a heavenly voice say to them, “Life on earth would be better if we could just lose that ancient 3.5 mm audio jack. Remove it, and all the problems of humankind will disappear as this evil excuse for an audio connector, this scourge, nay, this blight on the people, is banished from the earth!”

Apple senior vice president Phil Schiller defended the removal of the “ancient” 3.5 mm audio jack thusly: “It comes down to one word: Courage.”

Sorry, Phil. Courage is “what makes the elephant charge his tusk in the misty mist or the dusky dusk.” And “what makes the muskrat guard his musk.” It has absolutely nothing to do with the kind of torture you are about to inflict on millions of loyal iPhone users who did nothing to you, Phil. Nothing but put $240 billion in cash on your balance sheet and make Apple one of the most valuable companies in the world.

And so I shall end as I began and simply ask, “Are you f#$king kidding me?”