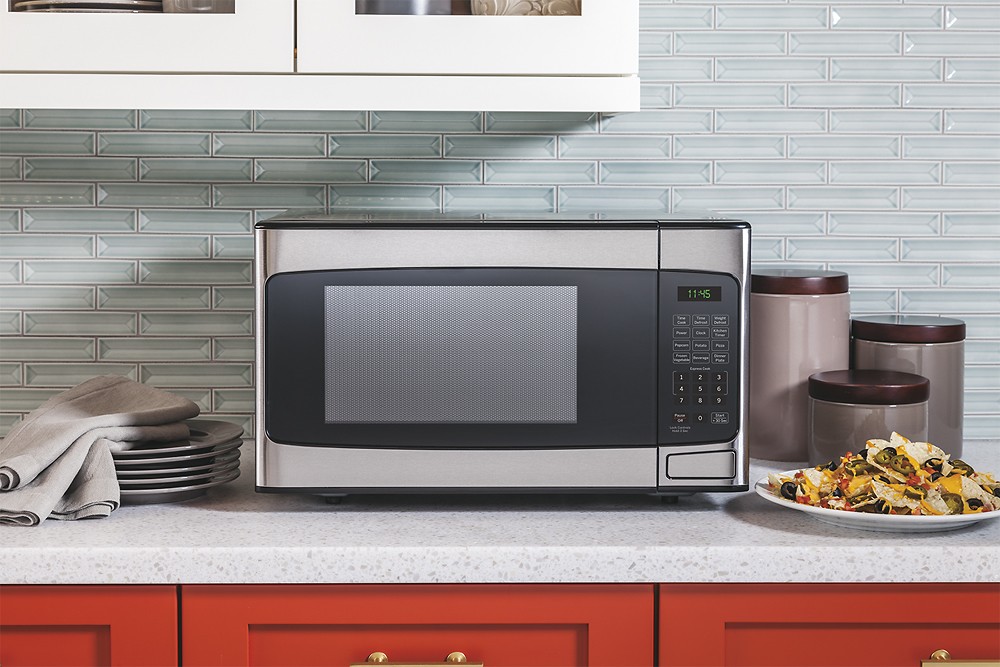 You can turn a microwave into a camera and I’ll teach you how in a minute, but before I do, let me share this news item. In a recent interview with a reporter from the Bergen Record, Kellyanne Conway was asked about surveillance. She responded: “There are many ways to surveil each other now, unfortunately. There was an article this week that talked about how you can surveil someone through their phones, certainly through their television sets, any number of different ways. And microwaves that turn into cameras, et cetera. So we know that that is just a fact of modern life.”

On its face, her statement about “microwaves that turn into cameras, et cetera” is ridiculous. It reminds me of the late Sen. Ted Stevens’ famous “Tubes” speech. I went right after “Uncle Ted” for his techno–faux pas, but even then, there were bigger issues to consider. It would be exceptionally easy to jump all over Ms. Conway for her techno–faux pas. But doing so would be taking a cheap shot at an easy target while completely missing a very, very important teaching moment.

First and foremost, if you are a normal person who does not have a professional security team ensuring your privacy, and you are targeted, you cannot hide. There are countless legal and illegal ways to watch you (assuming you’re interesting enough to be watched), and you will not know you are being watched until someone makes use of the surveilled material. Get over it. As Ms. Conway suggests, “that is just a fact of modern life.” If you’re wondering what these mysterious “countless ways” might be, type “surveillance” into Google and read through some of the 186 million results. This may have been her point. If it was, she was just fear-mongering. Very few people are interesting enough to be watched.

If your personal or business dealings require enterprise-grade security and privacy, you can hide. Although, even professional surveillors have trouble keeping up with professional surveillees – and vice versa, because surveillors and surveillees are locked in an iterative, accelerating arms race that will never end. That said, if this is the “fact of modern life” Ms. Conway was referring to, she either misspoke or was just misinformed about microwave ovens.

A Massive Gap in Understanding

The bigger problem with Ms. Conway’s statement was that it clearly illustrated that she has no idea what is, or is not, technologically possible. A blanket statement about digital surveillance may fulfill her communications mandate, but it raises a serious question: Does she (or do the people who crafted her message) know enough about the technology she’s attempting to describe to hold informed, rational policy discussions about it? And without this understanding, is it possible to lead the world into the 21st century?

Policy is already years behind technology, and it’s falling farther behind every day. Our elected officials need to have either a deep understanding of technological capabilities that are just over the horizon or the ability to enlist (and listen to) world-class tech advisors or, preferably, both. Sadly, this requirement for future-preparedness is not in evidence.

The Imminent Danger of IoT

Smart homes and connected devices are everywhere, and with the advent of natural language understanding (NLU) systems such as Alexa Voice Services, sales are becoming robust. Over the next few years, we will find sensors in every conceivable device, and all of these devices (an estimated 50 billion of them) will be connected to some kind of network.

Data security is already a formidable problem, and it will be an even bigger problem moving forward. But device security is also going to command our attention. There are almost no ubiquitously agreed-upon security standards for IoT devices. Just how many unregulated transceivers with central processing units do you want in your home? Is the hard-coded, unchangeable password to that network-connected, budget indoor/outdoor thermometer “1234?” If so, welcome to hacker heaven. Could an inexpensive device like this be used by hackers to commit a massive DDoS attack? In October 2016, that’s exactly what happened.

Will someone hack your devices to do something even worse? Time will tell, but Kellyanne Conway could have used her moment in the spotlight to ask real questions about IoT. BTW, earlier this week, Maureen Ohlhausen, acting head of the Federal Trade Commission, said the “Internet of Things should self-regulate.” ’Nuff said.

Turning Your Microwave into a Camera

As promised, here’s how to turn your microwave (oven), which is what I think Ms. Conway meant, into a camera.

Take a smartphone and connect it to your local area network (WiFi). Download any time-lapse photography app you like. Now, duct tape the smartphone to your microwave. Do your best to camouflage it and hide the charging cord. Walk away saying something like, “Nothing to see here, folks” to divert the attention of the curiosity seekers.

All kidding aside, there is no way to take a microwave oven and use it “as is” as a surveillance tool. Microwave ovens are shielded, not typically network-connected, and they do not possess the proper component parts for image-making. Even the transducer that makes the beep is not really suited for use as a microphone.

Importantly, this is not true of other devices Ms. Conway mentioned. A professional can install software in a smart television (which typically features a microphone for voice recognition and a camera for gesture control) for surveillance use. In practice, anything with a transducer (microphone or speaker) in your home that is network-connected is a relatively easy target for espionage. But – and this is a big but – in almost every case, someone would need to break into your home to do the required modifications. This is not true with respect to turning your smart phones or some other types of smart devices against you. That can be done remotely.

Lastly, none of these surveillance techniques are easy to accomplish, and all of them require a warrant from a court of competent jurisdiction. But the rules only apply to governments and law enforcement. Criminals (hackers and other bad guys) don’t tend to follow rules or regulations. That’s what makes them criminals. So, without promoting fear, uncertainty and doubt (FUD) and without espousing conspiracy theories, let me leave you with one thought. It’s the Wild West, it’s getting wilder by the day, and there ain’t no sheriff.

PreviousLife After the Robot Apocalypse NextIs Your TV Watching You? | Shelly Palmer on Fox 5