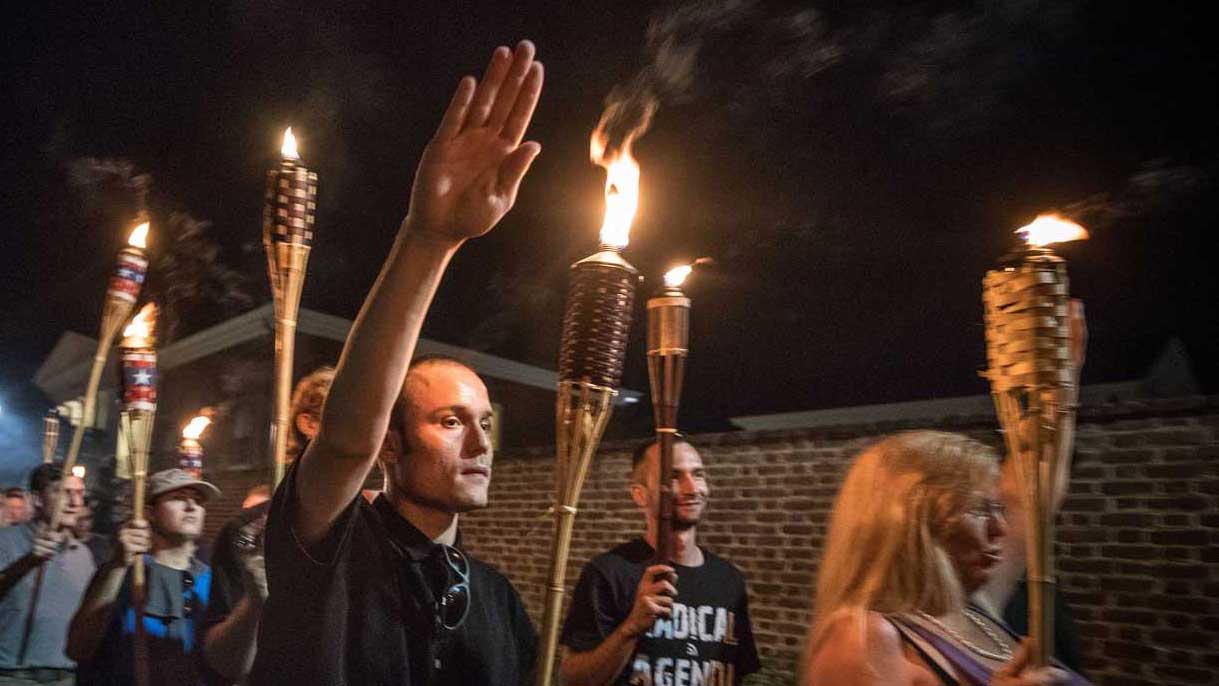 “I don’t want to be Jewish anymore.” My grandmother looked sympathetically at her seven-year-old grandson and asked why. “Everyone hates us, the Nazis killed us, and I don’t want to be killed just because I’m Jewish.”

During the course of that afternoon, my grandmother told me the story of how my great-grandparents fled Eastern Europe during the Pogroms. She told me the story of America – my story. It was about how simple merchants, farmers, bakers, and milliners from shtetls across the Russian Empire and Galicia risked everything to find a better life in America.

By the end of the day, she had reassured me that there were millions of Americans who would stand up for our religious freedom. It is why her parents (my great-grandparents) came to America. More than a half century later, I wonder if “millions of Americans” will be enough.

As morally reprehensible as President Trump’s populist politics may be, his inability to take a firm, unambiguous stance against racism, fascism, and white nationalism is unforgivable. I categorically reject arguments from those who suggest subtle nuanced explanations for what I heard with my own ears and saw with my own eyes: President Trump tacitly endorsing white supremacists, neo-Nazis, extremists, and bigots. He is unfit to lead us and should resign. Since he is unlikely to do so, people of good character must unite to promote the fundamental principles of justice and equality that define America.

Get Out of Your Echo Chamber

If you are still reading this, thank you. We agree that there is no place for this kind of evil in America. But there’s a problem. We’re just talking to each other, and we already agree. So here’s what I’d like you to do.

First, contact your elected officials. Send them emails telling them to speak truth to power. Tell them that if they will not stand up against President Trump’s vile endorsements, you will elect leaders who will.

Find your Representative by Zip Code.

It is not that we are too political. Talking about politics inside your comfort zone in an echo chamber is not political. It just confirms your beliefs. If you want to get political, choose a cause you believe in and go organize a community as a voting bloc. As Americans, we have enjoyed the peaceful transition of power in every election cycle since the dawn of the republic. Go organize and elect leaders who truly represent you. Here are a few sites that will help you do it.

Tech Tools That Will Empower You

Meetup.com – Create a meetup. Invite people you don’t agree with. Have a Socratic discussion. Find out what’s happening in Movements Meetup groups around the world and start meeting up with the ones near you.

5 Calls – Turn your passive participation into active resistance. Facebook likes and Twitter retweets can’t create the change you want to see. Calling your government on the phone can. Spend 5 minutes, make 5 calls. 5 Calls provides phone numbers and scripts so calling is quick and easy. The site uses your location to find your local representatives so your calls have more impact.

Calls for Change – Calling members of Congress is one of the most effective ways to influence the political process, and Calls for Change makes it simple and fast. Each week Calls for Change will send you all the information you need — from the right phone number to a sample script — so in just ten minutes you can make sure your voice is heard.

TogetherList – A comprehensive database of advocacy groups that focus on the rights of women, POC, LGBT+, immigrants, and Muslim-Americans. You can search for an organization by name, city, interest, or action. You can also browse by category or scroll through their homepage to see all the orgs.

Ragtag – Organizes teams of volunteer technologists to contribute to projects for community organizations and nonprofits.

Techs and Balances – A community of product managers, engineers, and designers providing pro bono work to humanitarian organizations in response to the recent wave of “inhumanitarian” policies announced by the Trump administration.

Tech for Campaigns – Organizes teams of volunteer technologists to support the campaigns of down-ballot progressive candidates running in 2018.

Y Combinator – If you’re working on a startup or nonprofit that addresses issues with news, the future of work, or improving democracy, apply for seed funding at Y Combinator.

I am a board member and a personal supporter of the ADL. It is an organization that fights threats to our democracy, including cyberhate, bullying, bias in schools and in the criminal justice system, terrorism, hate crimes, coercion of religious minorities, and contempt for anyone who is different. Learn more at www.adl.org.

Let’s Have an Intellectually Honest Debate

I believe in America. I am a fierce defender of the Constitution and the Bill of Rights. While I personally abhor hate speech of any kind and will do all in my power to eradicate it and its root causes, I am not suggesting that the government should prohibit anyone from thinking or saying what they think. It is my passionate belief in the idea of America that has inspired me to speak out against the president and to challenge those who support him. I hope you will do the same.