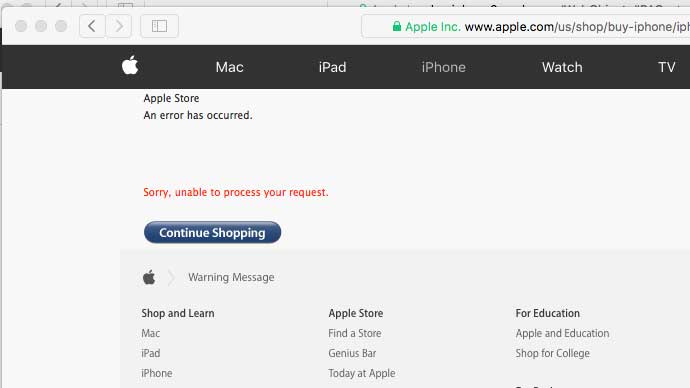 I wrote the last half of this article on October 27, 2017, circa 4:15 a.m. ET. I was tired and in a foul mood. I published it, posted it, tweeted about it, and did all the things I usually do with my content.

“Is this Shelton?” (No one ever calls me Shelton.)

“Marc from the Apple Store Team. Did you try to place an order for an iPhoneX?”

Truth be told, I thought I was being punked. But I listened quietly as Marc told me that Apple saw that my order was attempted circa midnight PT on October 27th and that they knew it did not go through. He went on to tell me that the issue was not Apple’s fault; it was the connection to the Citizens Bank database and an issue Apple had connecting with the “carrier.” He did not mention the carrier by name.

He took some information from me and promised that my phone would be delivered on November 3rd. Well done, Apple.

“Marc, I placed two orders 8 seconds apart circa midnight and neither went through. Can you check on the other one?”

“I don’t understand. You see the second order, but you can’t help me with it?”

“That’s correct. If we are going to help you with your second order, someone else will call you. Is there anything else I can help you with?”

“Do you have the name of a good divorce lawyer?”

Marc had no additional information or way to help with anything else. He was kind enough to send me an email confirming our conversation. It’s possible that I will hear from Apple on the second order. I’ll keep you posted.

I Want to Believe

I’m a pretty cynical person. Part of me thinks that this call was instigated or motivated by the original version of this article. But in the spirit of being reasonable, I am giving Apple the benefit of the doubt and asking if anyone else has received such a call. If you have, please email me and tell me your story.
If Apple did this on its own, I take 50 percent of what you’re about to read back. Honestly, I’m still not that excited about the phone.

Just for fun, I set my alarm for 2:45 a.m. ET and I decided to be the first kid on my block to get a brand new iPhoneX. What could go wrong? I know that Apple only has a few million phones available (as of October 27, 2017) and that the demand will be in the tens of millions, but I’ve been here before. Two browser windows open (one Safari, one Chrome), two iPhones running the Apple Store app – I was ready at 2:56 a.m. ET and clicking Refresh to make sure I was first into the online store.

I’ve been all the way through the order process 10 times. There were glitches on every screen, 20- to 30-second wait times for various processing of information, and several interspersed error messages. But in the end, the order button yielded a simple message: “We are unable to process your order. Please try again.”
This would not have bothered me if it didn’t require starting from scratch every time. What’s worse? No email communication, no reservation, no acknowledgment of getting through the entire order process, and, of course, no phones.

Importantly, my phones were acquired last year using Apple’s “new phone every year” plan. This requires some kind of semi-transparent deal with Citizens Bank. (I did the pre-approval in advance to ensure an easy purchase process, but apple.com had no idea this was done, and it didn’t ask for any type of confirmation number.) I don’t know if I could have purchased a new phone outright. There was no way to understand what I would be required to do with my old iPhone 7 Plus. I don’t really own it – the bank or Apple does (I don’t know which). Super-unfortunate – no communication, no way to get help, no way to do anything but waste time trying. Sisyphus would have been sympathetic to my frustration.

This is the very first iPhone I was not able to purchase on launch day. And the funny thing is, I don’t care. It’s a strange feeling, not caring about a new Apple product – especially an iPhone. It’s kind of liberating – sort of like ascending from my childish fanboy world into a soberer “My phone works fine and the new features aren’t compelling enough to make me rush to buy it” grown-up world.

I’m not going into an Apple store anytime soon. There’s no point. I can’t buy the phone at a store. I can’t buy it online, either. The site won’t process my order. I wonder, when am I going to go out of my way to sit on hold for an hour? (1-800-MY-APPLE won’t take calls at the moment, nor does online chat work – both are too busy.) I guess I’ll try them sometime in the next few days and see what happens. Then, I’ll just let it go.

I wish I felt like I “had” to have this new device. I don’t. It doesn’t have any “must have” new features (I’ll live without the new camera tricks for a while). In fact, other than having one to show my friends (who will expect me to have the latest hardware), I’m not sure why I need a new phone at all.

Apple, you may be one of the most valuable companies in the world. You may have more cash than anyone has ever accumulated. You may have the smartest people on the planet working for you. But at some point, bad products and services (MacBook Pro 2016, iOS 11 on older iPhones, etc.) and super-horrible consumer experiences (see above) are going to catch up with you. Yours truly, A Former Fanboy.

Will Congress Kill Facebook and the Rest of the Internet?