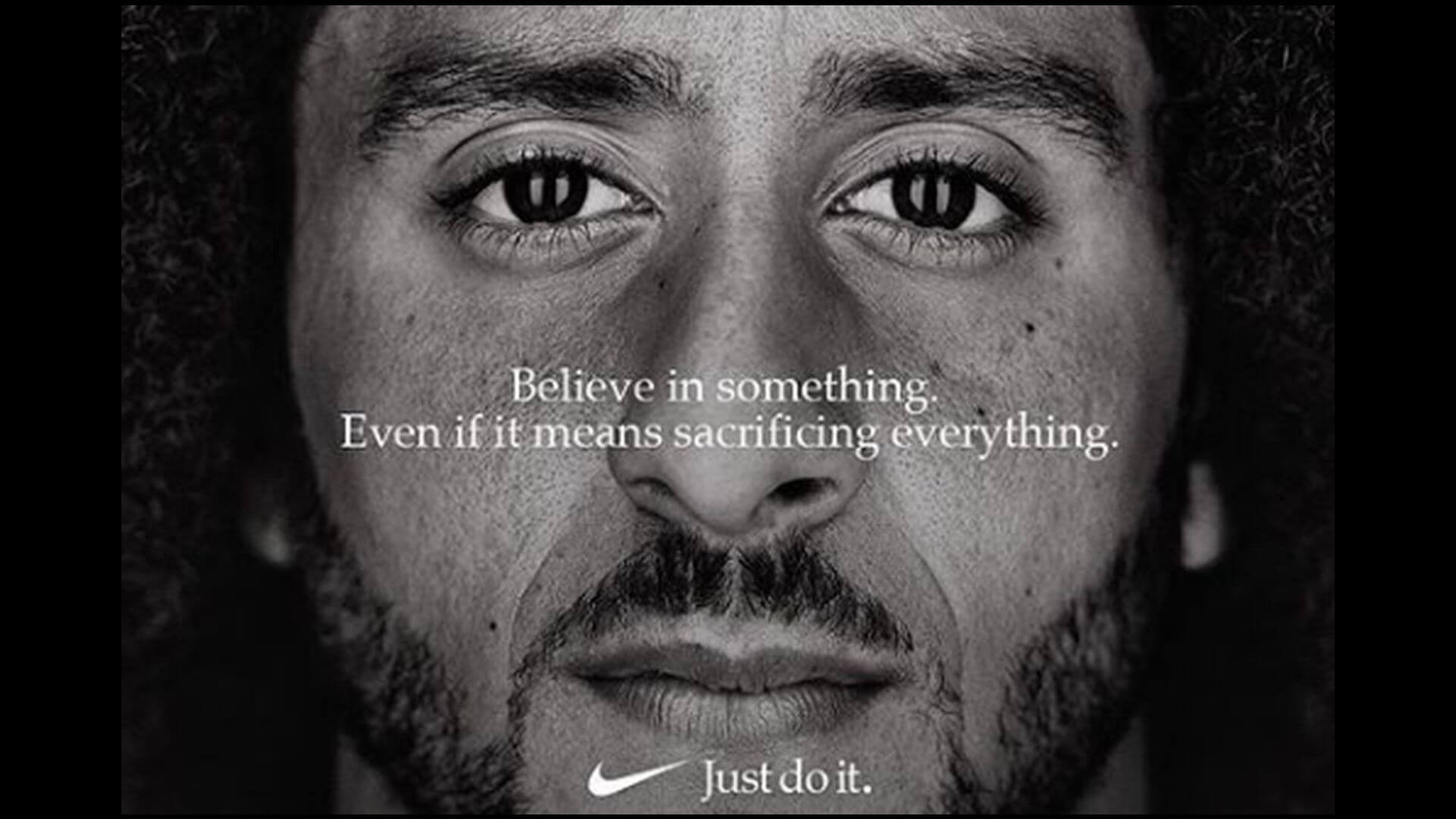 Nike’s tenet “Believe in something. Even if it means sacrificing everything.” is inspirational. While some are applauding Nike for standing up for what it believes, others (who disagree with Nike on this issue) find themselves torn between their love of the brand and their own beliefs.

Quinnipiac University found that American voters approve of Nike’s decision to put Colin Kaepernick in their advertising by a 49% to 37% margin. But that’s not the whole story. When it comes to taking a knee, 67% of voters ages 18–34 approve, while only 46% of voters age 65+ approve. The issue is also divided racially, with 53% of non-Hispanic white voters disapproving and 77% of black voters approving. Not surprisingly, 79% of Democrats approve, while 89% of Republicans disapprove. These numbers tell several stories. However, none of them say that taking a stand with Kaepernick as protagonist is a good idea.

According to Bloomberg, ten days after Nike’s Kaepernick ad led to calls for boycotts, shares hit an all-time high, closing at $83.47 Thursday. That said, in spite of an absolute dearth of competent NFL quarterbacks, no team has signed Colin Kaepernick.

The Marketer’s Argument for Brand Bravery

According to a Shelton Group study, 86% of consumers believe companies should take a stand for social issues, and 64% of those consumers are “very likely” to purchase from a company that makes that pledge. These people (dubbed “CorpSumers”) make up about one-third of the market, according to a Unilever study. Even for those who don’t speak with their wallets, corporate impact does not go unnoticed; 92% of consumers say they have a more positive image of a company when the company supports a social or environmental issue, according to a 2017 Cone Communications study, and 78% of Americans believe companies must positively impact society.

The Financial Impact of Brand Bravery

There is a vast amount of research to support the notion that the stances you take and the groups you support matter. Belief-driven consumers can impact your bottom line in big ways. According to Spotlight on CSR, 28% of U.S. adults have stopped using a brand because of something negative they heard about in the news, while 50% of consumers are belief-driven and have either started or stopped buying a brand based on that brand’s stance on a controversial or social issue.

As Unilever CEO Paul Polman notes in a piece he wrote on the Huffington Post: “Three-quarters of the population believe that business can take action to both improve profits and raise wider economic and social conditions. The UN Sustainable Development Goals (SDGs) also present a minimum $12 trillion economic opportunity for business to help create an economy that is fairer, more stable, broadly based and more sustainable.” He’s done his homework. According to Unilever, there’s an “estimated $1.2 trillion available to brands that make their sustainability credentials clear,” and brands that strive to improve quality of life outperform the stock market by 120% (Interbrand’s Best Global Brands 2017).

According to a study, 74% of respondents say their job is more fulfilling when they are provided opportunities to make a positive impact at work. As more millennials enter the workforce, this type of satisfaction may be more important than ever.

Millennials are the largest part of the workforce and they dominate the market. This group is on pace to become not only the largest generation in U.S. history but also the wealthiest, with roughly $41 trillion making its way into their hands over the next 30 years.

More so than any other generation, millennials are emphatic about businesses doing good for the community, and they speak with their wallets; 76% of young people said they have considered or would consider purchasing a brand to show support for the issues the brand supported, while 67% have stopped purchasing or would consider stopping if the company didn’t align to their values.

Wondering where to begin? According to a Cause and Social Influence survey, the top issues for young people are civil rights and racial discrimination (29%), gun safety (22%), immigration (21%), and climate change (21%).

It’s Not as Easy as It Looks

Socially responsible companies have a major leg up on the competition when it comes to hiring, too, as 75% of millennials would take a pay cut to work for such a company. That same study says 64% of millennials won’t take a job if a potential employer doesn’t have strong corporate social responsibility (CSR) practices.

There are clear winners. The Kaepernick campaign was demonstrably good for Nike’s business. Another clear winner is outdoor clothing manufacturer Patagonia, which has always donated money to conservation and land protection efforts. It is one of the brand’s core principles. So when President Trump announced his plan to roll back protections of two national monuments in Utah, Patagonia sued. The company’s commitment to its core values was unquestionable, and sales increased.

But brand bravery is not created equal. TOMS’s “One for One” business model donates a pair of shoes to children around the world for each pair you buy. While some think this is a good idea, others (like Vox) have criticized the company for its efforts. For years, Starbucks has focused on its global and social impact – the company has an entire section of its site dedicated to social good – and last year it committed to hiring 10,000 refugees in direct response to Donald Trump’s temporary immigration ban. Starbucks faced backlash, though, with analysts saying it hurt the company’s brand.

The Canary in the Coal Mine

Earlier this month, Levi Strauss & Company established a “Safer Tomorrow Fund” and put $1 million toward nonprofits and youth activists who are working to end gun violence in America. Charles V. Bergh, the company’s CEO, knows this move will anger some customers: “It’s inevitable that we’re going to alienate some consumers, but we can no longer sit on the sidelines and remain silent on this issue.”

I applaud Levi’s efforts and, because of my dedication to ending gun violence in America, I know there are some Levi’s jeans in my future. But it’s too soon to tell how Levi’s customers are going to respond.

Brand Bravery Isn’t Everything; It’s the Only Thing

Was the potential upside of the “Believe in something. Even if it means sacrificing everything.” campaign worth the risk? Read it again. It’s what Nike believes.

From Democracy to Technocracy