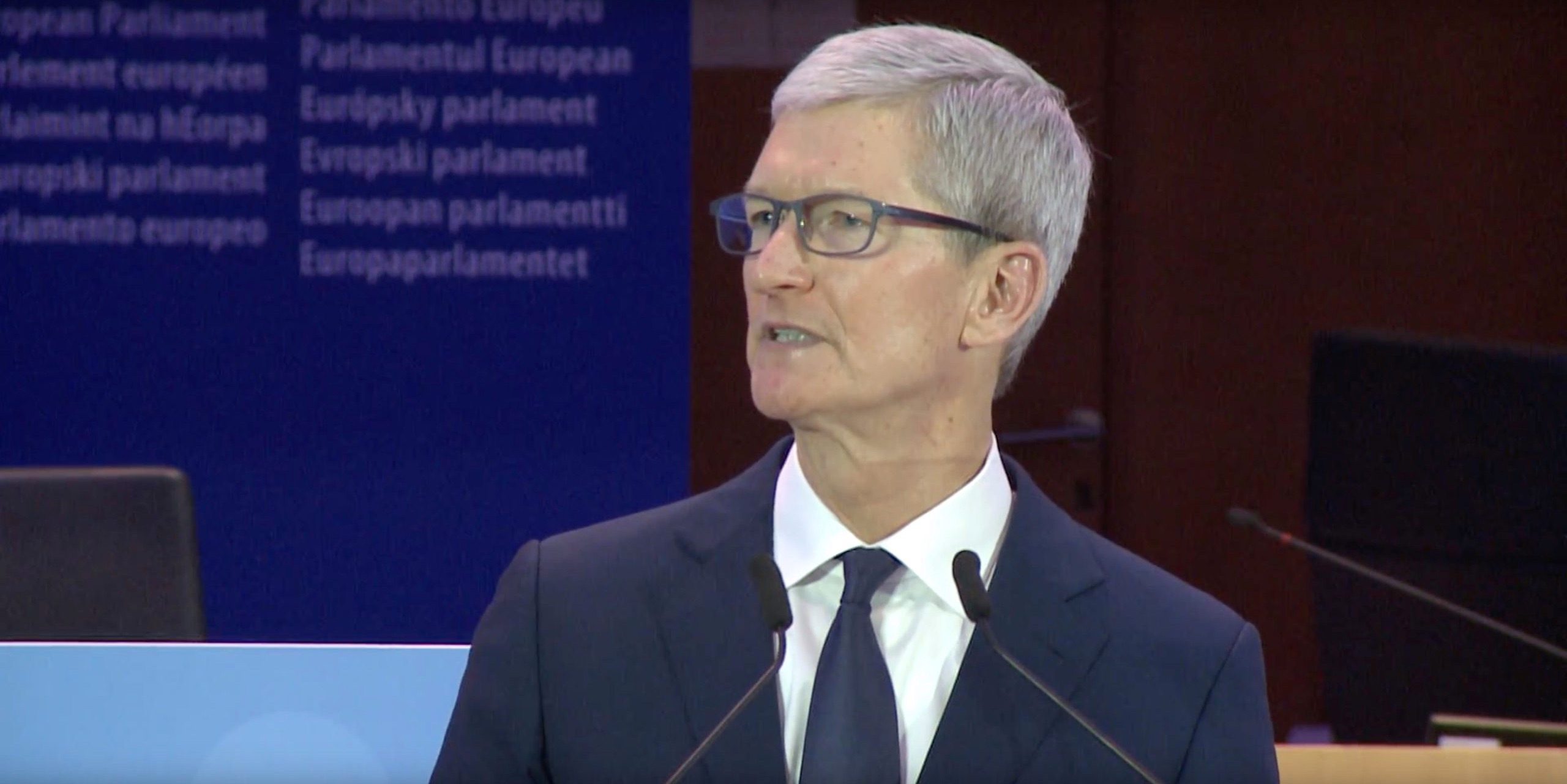 Apple is the most valuable tech company in the world. So when its CEO lambasts other tech companies for “weaponizing [user data] against us with military efficiency,” people are going to take him seriously. After all, Tim Cook is the de facto leader of the tech world. While he didn’t name names, his vilification was clearly aimed at his corporate peers (which ordinarily would be good clean fun), except as presented, his accusations sounded like self-serving corporate posturing. Of course, there is another possibility … Tim may have just been speaking metaphorically.

During a recent keynote, Tim said:

Every day, billions of dollars change hands and countless decisions are made on the basis of our likes and dislikes, our friends and families, our relationships and conversations, our wishes and fears, our hopes and dreams. These scraps of data, each one harmless enough on its own, are carefully assembled, synthesized, traded and sold.

I will be the first to admit that his assertions about how data is “assembled, synthesized, traded and sold” are irrefutable. But using available data to put the right content in front of the right person, in the right place, at the right time is (and always has been) every content creator’s goal. If you offer a product or service, job #1 is to segment your audience into clearly defined targets and provide them with content with which they will engage. As you know, Apple has done some of the best, most effective advertising ever created. So where is Tim going with this?

During his keynote, Tim described how he believes companies “weaponize” what we share online and use it to serve us extreme content to change the way we view the world, saying: “If green is your favorite color, you may find yourself reading a lot of articles — or watching a lot of videos — about the insidious threat from people who like orange.”

What he failed to mention is why this is different from Apple using the data Apple has about us to send us relevant messages about a new product or service from Apple. Apple’s goal is to change our world view from buying a competing product to buying an Apple product. “The lady doth protest too much, methinks.”

In fairness, Cook did discuss the transformative power of technology, its potential for good, and how regulations like GDPR are protecting our privacy. But then he denounced what was happening at U.S. tech companies, calling it “surveillance” where “these stockpiles of personal data serve only to enrich the companies that collect them.”

While his message sounds altruistic, it is actually self-serving. If Congress miraculously managed to pass strict privacy laws, companies like Apple (and the rest of FAANG) would benefit the most. Stricter privacy laws would make it impossible for startups and small companies to obtain anything like the scale of Facebook, Apple, or Google. American regulations akin to GDPR would all but ensure that the data rich get data richer and the data poor get data poorer.

Data Is More Powerful in the Presence of Other Data

While it may be anecdotally true that the most brilliant minds on the planet are working hard to get us to click on ads, we not should fear the people or the strategy. It’s hard to sell umbrellas where it doesn’t rain very often. Targeting people where it frequently rains is a better strategy. Tactically, data is more powerful in the presence of other data. This means that while having someone’s name and phone number and a recent sales receipt is good, classifying them, segmenting them, and enriching their profiles with thousands of data points is better. And the more complete the profile, the better you will be at predicting behaviors – like buying umbrellas, clicking on ads, buying Apple products, or voting.

Is There Such a Thing as Weaponized Data?

It is easy to opine about the militarization or weaponization of data. You can imagine all kinds of doomsday scenarios. Many cybersecurity professionals are on the speaking circuit telling stories about military-grade cyberweapons, data bombs, and the havoc they could unleash. While it is important to be vigilant (because everyone has either been hacked, or is going to be hacked; it is unavoidable), it is also important to understand that we have no more control of a “cyber Pearl Harbor” event than we did over the real Pearl Harbor attack that brought us into World War II (may those brave souls rest in peace).

For now, weaponized data is mostly theoretical. Searching for “data bomb” on Google News yields fewer than 100 results (when was the last time you searched for something on Google and got so few results?).

Gigaom likened big data to an atomic bomb five years ago, and Forbes described how we’re sitting on a virtual data bomb created by the Internet of Things. While the term has been in use for at least a decade, it’s often used interchangeably with the term “data dump.”

The phrase “weaponization of data” is a bit more popular, with more than 700 hits, but nearly half of those were published after Cook’s speech. In describing the weaponization of data to rig and win elections, the New York Times wondered, “If Everything Can Be ‘Weaponized,’ What Should We Fear?”

All Roads Lead to Cambridge Analytica

After clicking around for a while, it became clear that the vast majority of authors cited one real-world example: the Cambridge Analytica scandal. It’s the first instance of the “weaponization of data” (à la Tim Cook’s description) big enough and interesting enough to make news.

In the Cambridge Analytica scandal, there were no victims. Yes, the data was copied without proper authorization and yes, there were a lot of people involved. But at the end of the day, no one used that data in any weaponized way. Said differently, everything people assumed you could do (or was done) with the misappropriated Facebook data could have been done (more effectively) just using Facebook and Google’s targeted advertising tools.

Congress was right to hold Facebook accountable, and Facebook took responsibility for its mistakes, but let’s be clear: neither Facebook, Google, nor Apple has to sell its data to anyone in order to profit from it. Facebook, Google, and Apple don’t need to make their data visible, downloadable, or even searchable. All they need to do is offer you audience segments with a propensity to engage with your content at a price you are willing to pay.

Tim, I understand that you are speaking metaphorically when you choose phrases like “weaponized data” and “military efficiency.” But lots of people who heard you think you meant actual weapons. It might have been better to say, “Data-driven advertising works exceptionally well and data-rich companies that have expertise in aggregating and transforming data, as well as learning and predicting from data, have a clear competitive advantage.” That might not be as poetic (or memorable) as “weaponized data” and “military efficiency,” but instead of engendering fear, it might have inspired innovation.

PreviousDeepfakes: The Dawn of the Post-Truth Era NextApple Reveals New Products at BAM