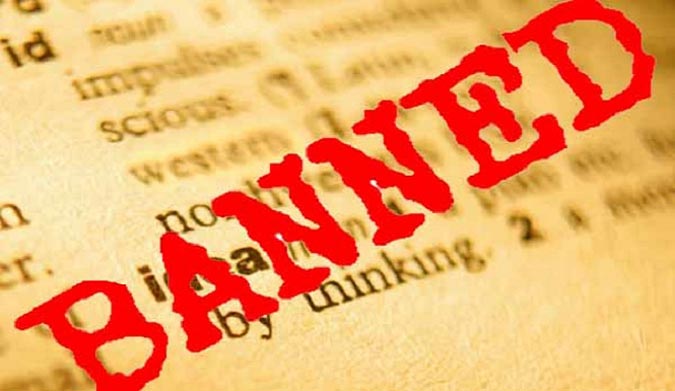 Here is a list of buzzwords, biz speak, and hipster droppings that should be banned from every business meeting forevermore. Does the following sound familiar?

[Consultant]: “Well, it sounds like he took it to the next level … efforting 110% to craft a best practices, robust solution you can leverage, and it’s clearly out of the box thinking … but maybe you shouldn’t try to boil the ocean … it’s got a lot of moving parts and I’m not sure it’s something you want to take ownership of. … You might be accused of punching the puppy, so the optics are all wrong. We should probably put this in the parking lot.”

Sounds pretty stupid, right? If you don’t like these phrases strung together, why use them individually? So, without further ado:

Banned Words (in No Particular Order)

We Hacked It – Just say, “Figured it out.” Unless you are under investigation by the FBI, NSA, or any of the other 15 national security agencies, you’re not a hacker. Not even close.

Paradigm Shift – Do you mean there is a new archetype or an outstandingly clear example of a shift from the original pattern or model of “All things of the same type are representations or copies?” If not, it’s just “something new.”

Disrupt Ourselves – or other people will disrupt us first. I get it! Try “innovation,” “transformation,” or just simply “change.” All are great words to describe another overused but more accurate phrase, “Adapt, or die!”

Hockey Stick – Really? A hockey stick? We are living in the Age of Exponentialism. Everything is changing exponentially every day. We’re somewhere on the blade of the hockey stick; we passed the “stick” part about 5,000 years ago. While we’re on the subject, stop drawing the curve in the air with your hands when you say it – it drives me crazy!

Out of the Box – Just say, “We have escaped our Luddite boundaries and evolved our thinking beyond the rectangular indications on the org chart.” What? You think that sounds stupid? It does sound stupid, but it’s 50 times more interesting than “out of the box.”

Back by Popular Demand

Learnings – Just stop! I learned, we learned, he/she/it learned – it’s the easiest verb to conjugate in the English language. Ugh! BTW, you should stop using “efforting.” See the aforementioned “learnings.”

Ideate – Really? People who use “ideate” clearly have no idea about the process of ideation. It should cost you $20 every time you get the idea to say it.

Rock Star – Let me be very, very clear: there are no rock stars in any profession other than rock music. Rap stars don’t call themselves rock stars. Neither do EDM, country, soul, R&B, jazz, or even folk stars. Why on earth would anyone who doesn’t play rock for a living think it’s OK to call someone in business a rock star? When you can jump across the stage and land on your knees while playing a Bb7#9 chord, screaming the lyrics (on key) with pyrotechnics exploding all around you in front of 20,000 adoring fans, you’re a rock star. If you’re great at media buying or human resources … well, you get my point.

Scalable – As opposed to what? We’ve built a new app that can only run on three devices simultaneously, but we’re hopeful. Who says that? Even if it’s true, you’re going to lie and say it’s carrier-grade and bulletproof. Has anyone ever been in a meeting where someone said, “Our technology doesn’t scale”? Body shops don’t scale; people don’t scale; boutiques don’t scale; custom donut shops don’t scale. Technology scales!

Overheard at a Trade Event

Person: “We’re a startup. We’re using blockchain to create loyalty programs for the cannabis industry.” Me: “Why aren’t you just using a database?” Person: “Are you kidding me? Man … blockchain is way cooler.” Honestly, you can’t make this stuff up. Please stop saying the word “blockchain.” Forget you ever heard it. You don’t know what it means. You don’t know how it works, and most importantly, you have no idea when or why it is an appropriate solution for your use case. That said, if you do know when, why, and how to use it, say it loud and proud!

Person: “Our [fill in the blank] uses AI to blah, blah, blah.” Me: “How exactly does it do that?” Person: “Um … it learns by itself.” Truly, I’m going to die. No, your project does not use AI the way you are describing it. To someone who knows the state of the art, you sound like a moron. To someone who doesn’t know anything about AI, you sound like a Martian. And people who kind of know something about AI will ask you a question you cannot answer, and then you will sound like an even bigger moron.

Unless you know exactly how to describe the AI tools you are using, just use normal English. Words like “automatically” or, if you must, “the computer will” are much better choices than contributing to the ubiquity of buzzword BS. Here’s a secret: if you describe how your (fill in the blank) creates value or solves a specific problem, and it really does create value or solve a specific problem, no one – and I mean no one – is going to care how you do it. Said differently, the people you are torturing with buzzwords are going to send engineers and scientists to talk to you about the nuts and bolts of your masterwork, and there is a 100 percent chance that you are going to have to send your engineers and scientists to that meeting – a meeting to which you will contribute very, very little.

If 5G is just about better cell service than 4G LTE, there’s no reason for it. 5G technology, when fully deployed (which may not be for quite some time), will absolutely change how our world works. Why? Because the use cases for wireless high-bandwidth, low-latency networks are limited only by your imagination. Talk about 5G factories, or 5G hospitals, or 5G C-V2X. Do not talk to me about 5G cell service. There are few, if any, features on your 4G LTE phone that will work better with a 5G network. 5G will allow smartphone manufacturers to add new features (that you have not seen yet), like awesome Augmented Reality or instant audio translation (like Star Trek’s universal translator) or identifying you as a pedestrian (via 5G C-V2X) to an oncoming autonomous vehicle. So, please, if you are going to use 5G in a sentence, research the use case first. It will make the world a better place.

These are just a few of the buzzwords that are driving me crazy. I’ve published banned word lists before (“learnings,” “efforting,” and “rock star” are oldies but goodies, I don’t think they are ever going away). Now, I am asking for your assistance. Please send me your list of buzzwords or other phrases that should be banned (Form below). I will use an AI system to read your replies and log the responses on a blockchain using 5G, and if that doesn’t work, our rock star CTO will use the learnings to effort a new MVP.

Disclaimer: By simply attributing this list of banned words to me, you will receive a nonexclusive, worldwide, perpetual, irrevocable, royalty-free, sublicensable, and transferable (through multiple tiers) right and license to exercise any and all copyright, trademark, publicity, and database rights that you have in the User Content in any and all formats or media now known or hereafter devised in the future. You are further hereby granted the nonexclusive, irrevocable, and unconditional right and license to describe, relate, broadcast, exhibit, transmit, publish, use, monetize, distribute, and/or exploit your User Content in any such manner as you shall elect, in whole or in part, on the Internet, in print and electronic form, in merchandising, publicity, and advertising, or in any other media now known or hereafter created or devised throughout the universe in perpetuity.